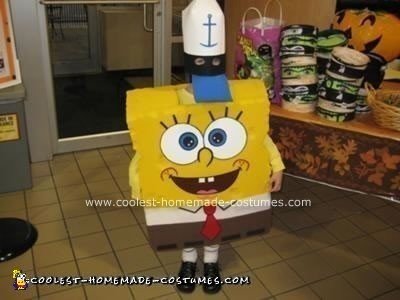 This Homemade Sponge Bob Square Pants Costume was a blast to make! First I searched for someone willing to part with his or her foam mattress. An egg crate mattress will do, however I was lucky enough to find one that was flat.

Fit your child. I laid my son on the mattress and drew a rectangular box around him. Then, I cut out the rectangle shape. Then, I cut the sides. I used 3M’s spray 77 adhesive and glued the rectangles together to form a 3D Spongebob. I cut a hole for his head and holes for his arms and used the scissors to cut indentations all around the costume, including the corners to give it a more ripple spongy effect.

Spray paint the costume yellow, several coats. Next, I used craft foam sheets to cut out Spongebob’s face. I couldn’t find a foam sheet the color of the open mouth, so I painted the brown foam with a mix of red/brown paint. I used a brown and white felt for the pants and red for the tie, and used spray 77 to put it on. Hot glue will melt the foam mattress.

I used a sharpee marker to draw the detail on the tie. The hat/mask is craft foam sheets. Take two or three sheets of white craft foam, hot glue them together at the longer sides and measure it for your kids head, mark where it fits and cut the extra off and hot glue it together. Then, cut several slits at the top and fold it in and glue it.

Take a black foam circle and glue it to the top for the button on his cap, cut holes for the eyes. Stuff the hat with fiberfill, enough that your kid can see out of the holes, attach a piece of elastic for your child’s chin. All the detail is cut from craft foam sheets, including the anchor on the hat/mask.

The blue foam I used for the bill is held up with fishing line to make it curl. I dyed a shirt and thermal pants yellow, the white tube socks have red and blue stripes painted on with dimensional paint. Black shoes. Voila, Spongebob Halloween Pants.