My son loves Sid the Science Kid and I could not find a costume to buy so I got creative. For the wig I bought some blue felt, a stocking cap and some cotton stuffing, I sewed a bunch of little pockets then stuffed them with the cotton stuffing and sewed them randomly around the stocking cap until it was completely filled in.

I found a pattern for a hooded sweatshirt with a pocket and the pants, I used a heavy fleece fabric for the sweatshirt and a flannel material for the pants since it gets a little cold around here on Halloween. For the shoes I used blue slippers and covered them in red felt so they looked big and fluffy like Sid’s shoes. I bought the Sid the Science kid microphone and a blue backpack and then I added an iron on Sid the Science kid to the backpack.

He loves his homemade Sid the science kid costume and looks so cute in it. 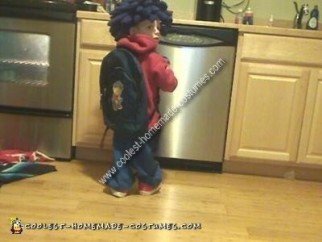 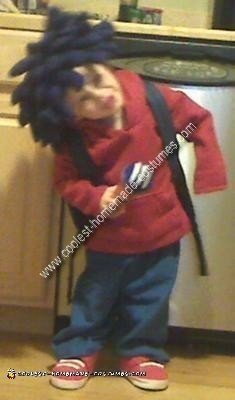