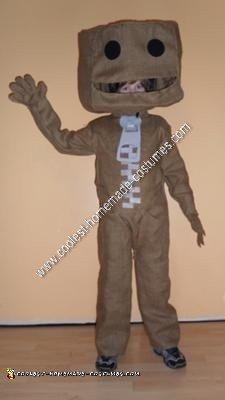 Every year I let my kids be anything they want to be, and this year my son’s choice was Sackboy from the Playstation 3 – game Little Big Planet.

To create the head of this homemade Sackboy from Little Big Planet Halloween costume, I built it around a bike helmet with electric fence wire, covering all sharp areas with tape. Next I covered the head with burlap, using a glue gun to hold it in place. I then cut two eyes out of stick on black felt and glued them on to make sure they stayed in place.

To create the body I basically measured my son and made each part to cover his body including a torso part, arms which I glued on and legs which I brought up over his hips to give the impression that his legs were like Sackboy’s…. I also made a pair of gloves, and let me tell you – they are not the easiest when you’re making them out of burlap!

And finally I created a ‘zipper’ out of grey felt which I cut into small rectangles and glued on and I made the zipper pull out of the same felt but used the rest of the sticky black felt as a backing to make it sturdy. The pull actually moves, it rocks! In the end it all worked out and he was a big hit when he went trick or treating! Definitely the only Sackboy costume around I am sure :D