Last year we decided a little redneck gender-switchin? would be fun for Halloween. “Rogina” only took about 15 minutes to create. We used a nightgown and a long blonde wig. I chopped off the bangs and rolled up the rest awkwardly in hot rollers. “Her” makeup was just cheap face paint, after all, we wanted it as gaudy as possible.

For D. B. we used a tobacco stained Nascar t-shirt with a homemade beer belly, camouflage hat & boots, fake tattoo sleeves, fake mustache, & bubba teeth. I drew the uni-brow with an eyebrow pencil & created the beard using my own hair out of my hairbrush. I rubbed it between my hands until it was really ratty, then cut it with scissors & glued that to my face with spirit gum.

The “plumber’s butt” was really the hit of the party, though. I drew a pattern on cardboard – using my own backside ;P – & used dark brown thread to stitch the “crack”. I stuffed the “cheeks”, & used some blush to make them all nice and rosy. I tied it around my waist then used pieces of sticky-sided Velcro to hold everything in place: the shirt just above the cheeks, the undies just below the cheeks but above the pants, etc.

Everyone got a big kick out of our homemade redneck couple costume and my own Mother didn’t even recognize me! We teased her mercilessly about flirting with “D.B.”!!

Because I already had most of this stuff laying around (after all, we DO live in Alabama), I probably only spent around $15 -if that much- for both costumes. 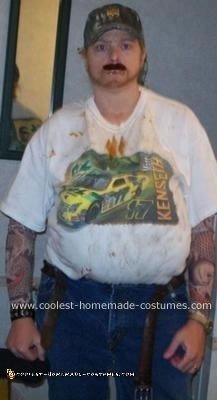 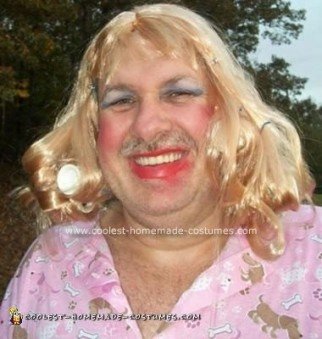 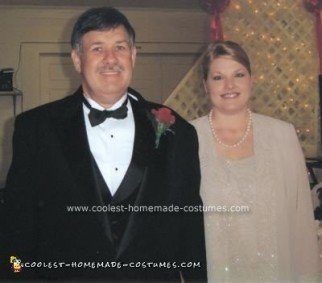