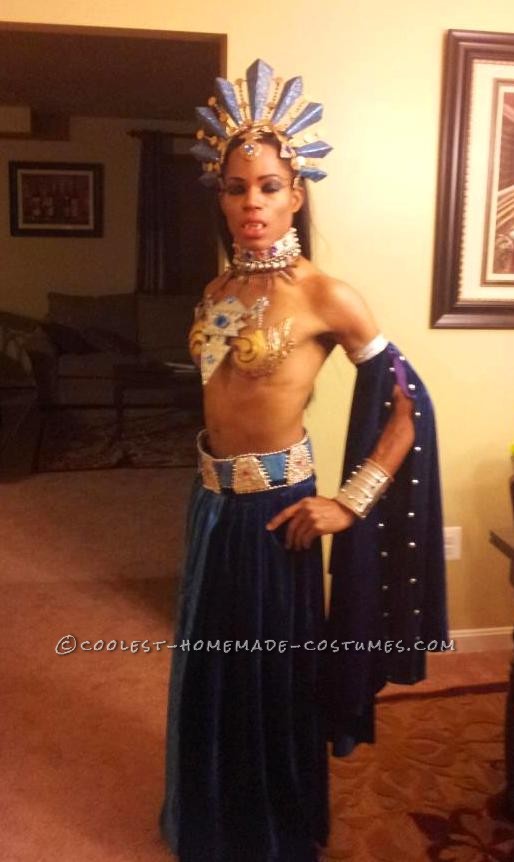 You can either make this costume yourself as I did or even buy it at a costume shop (good luck).  Stuart Townsend is the vampire Lestat, who has awakened from a century-long slumber and turned his considerable energy to rock music. Lestat ‘s powerful music reaches the ear of the slumbering Akasha (Aaliyah), the millennia-old “queen of the vampires ” who was the first immortal bloodsucker. Akasha is soon free and embarking on a quest to seize control of the world with Lestat at her side.

I started this costume 3 months prior to Halloween.  I wore this Oct, Halloween 2013 and won DC ‘s annual Hottest Halloween Costume Contest ($1,000).  That night was amazing walking the streets and having so many people stop for pictures and autographs.  I really felt like a Queen of The Damned.

Aaliyah actually rocks several outfit choices from the movie and after carefully considering my options as far as time, product availability and money I decided on her signature look, which is very intricate and has detailed beading all over (bra top, chest piece, head piece etc).

I constructed the crown piece first, this was more challenging.  I printed off several pictures of the crown piece from different angles.  Utilizing the sturdy wiring * you can use clothes hanger wires which is very cheap if you have some laying around, it will need to be measured in different lengths for a base structure for the head piece.  This is more so based on your head size in relation to the crown Aaliyah wore.  Once you have a basic structure you can then start to make the triangular points that will cover the wiring across the top front of the crown and there are many of these. I covered the triangular pieces with aluminum foil to give the pieces a more ancient crackled look, then spray painted them, and then did a light brush painting to make them blue/green tint and then took a small brush to detail over the small wrinkles of foil to make it pop.

Once these were done, I gradually glued/wired them onto the points on the crown then went in between and set gold/bronzed painted coins in 3 ‘s in between each crown spike.  The coin pieces I actually used old pennies covered in foiled and painted to look goldish bronze.  Each little jewelry piece that goes around the crown I cut out of hard cardboard to match the different triangle, shapes that are shown on the crown.  Those are glued into place around the wiring of the crown piece and then covered with colored jewels.

I started on the necklace piece once I wrapped up the crown. The necklace is also made out of wiring, hard carboard.  Basicallly the structure is all hard board, each piece cut diagonally and horizontally to match with the one from the movie.  I use hot/super adhesive glue to set everything.  I covered the board in aluminum foil and then spray painted then hand painted once dried for an ancient look.

The bra piece I made out of foam, hot glue, paint and a bra, lots of carving, molding and shaping, since I have no actual breast to help, I became very creative as you will see from the pictures.  I  purchased fabric from JoAnn, cut the pattern and sewed the appropriate size needed for my arm gaunlets and skirt, plus belt.  Rhinestones make wonderful accents and pops so well in the light.

I purchased my vampire teeth and contacts online which made this outfit very hot and real!  The hair I purchased from a wig store, cut and combined to look like one long flowing piece which was then wrapped and pinned in an intricate woven bun that sat on top of my head in behind the crown.

I actually took several pictures of the stages for each piece but cannot seem to find them.  I ‘m willing to help anyone out with suggestions of how to ‘s and techniques if interested in making this costume.  You ‘ll see from my pictures the costume was very close and on point to the movie. 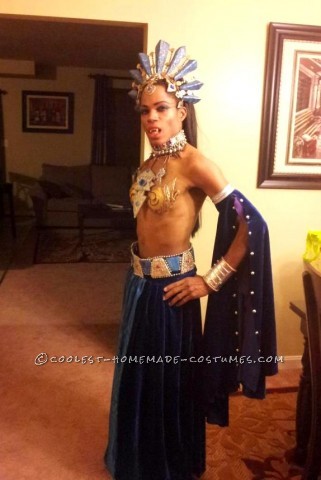 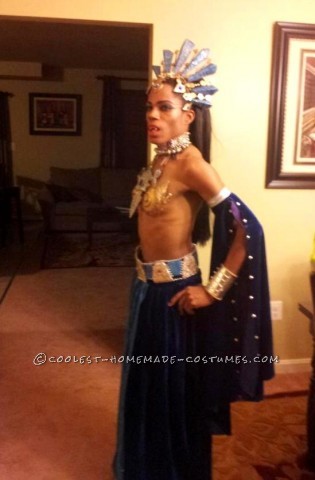 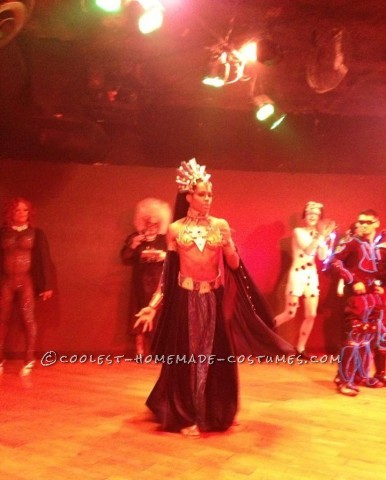 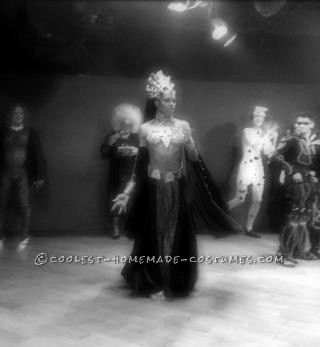 24 thoughts on “Coolest Homemade Queen of The Damned Costume”