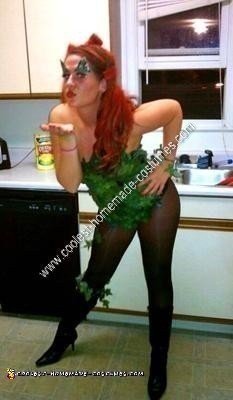 My Homemade Poison Ivy Costume was so cheap to make and super easy! I am a college student and needed a cheap costume and needed it 2 days before Halloween. I got a little girl’s leotard at Wal-mart for eight bucks! Since, they only came in short-sleeved, I just cut a sleeve off and made the other arm into a shorter strap.

Once I purchased the leotard, I went to the Dollar store and bought dollar strands of leaves. I believe I bought 7 of them, which I included as the vine going up legs and the random ones in my hair. I cut each leaf off the vine and just super glued it to my leotard. It might be easier to have someone glue the leaves on you while you have the leotard on (took two days to do).

I got all the rest of my stuff at Wal-mart too. I went into the sale section and bought a pack of 2 black tights for 3 dollars and red hair spray paint for a dollar!

For my eyebrows I just followed a flame pattern online that I found and traced and the pattern out on a cereal box in my kitchen. The cardboard is sturdy material that will give a good 2D dimensional effect. All I did was find random paint in my house that was green and got red and glittery fingernail polish that was in my bathroom and designed the eyebrows however I wanted. You probably want to know how the stuck to my eyebrows, I got fake eyelashes from Wal mart for 3 dollars and used the glue that the eyelashes came with and put it on my eyebrows and pushed the cardboard eyebrows to them (none of my eyebrow hairs came off and didn’t hurt to peel off). This stuck on my face THE WHOLE NIGHT and I was dancing and sweating.

Hair: got red hair spray paint for a dollar. All I did was twist 2 random chunks on the top of my hair and bobby pinned it in a circle. Then spray my hair all over.

Boots: got them at Payless a long time a go for ten dollars.

This is all I did to have a great Halloween costume. I got so many compliments and was one of a kind. 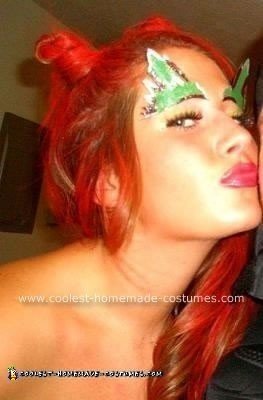