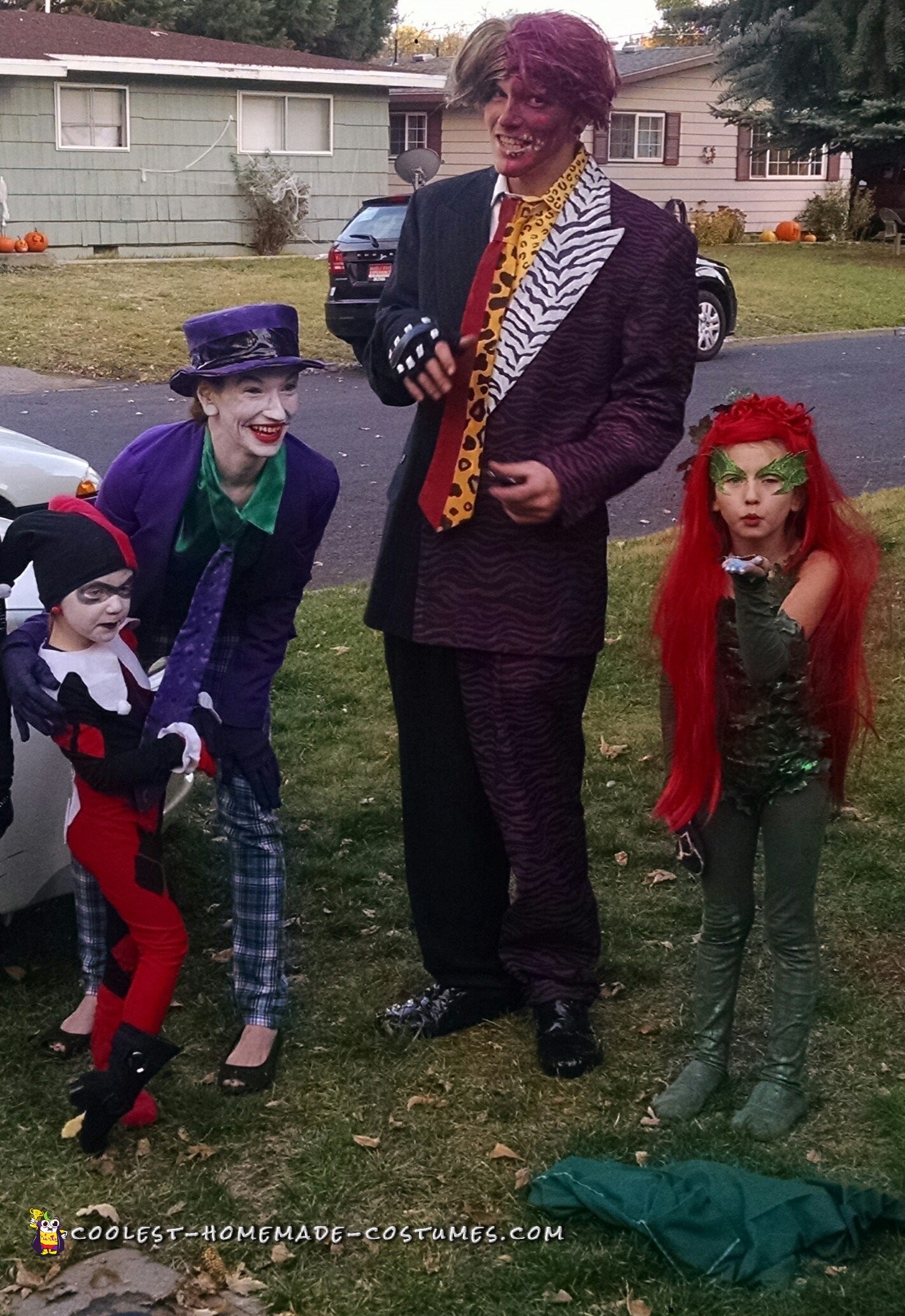 My oldest daughter is the one who started the batman villain theme. She is 8 years old and loves all the old batman movies. She chose poison ivy as her costume and that just triggered the rest of the family into dressing up too. I wanted to try and stick as close as possible to the original movie characters (not a fan of the female version to any costume, girls can wear pants too!) My youngest isn’t into the batman movies yet and she wanted to dress up with us so I let her watch the old cartoon to look for a character. She chose Harley Quinn, probably because Harley loves joker. The kids even got into character by using their sayings. So all night Harley Quinn was calling me Mr. J and puddin.

Two face: The two face costume was the least materials but the most time consuming. The suit was bought at goodwill. It was a plain black suit and I used magenta paint to paint half the suit. Once painted magenta I used sharpie to draw all the tiger stripes on the jacket and pants. I used the same process for the under shirt; used old shirt, painted half yellow, and then used sharpie for all the little leopard prints on the shirt. I made the tie with fabric (first diy tie ever! no pattern!) we had lying around and then painted it and used sharpie on that too. For the shoes we just used duct tape to cover some old shoes and make them look like shiny dress shoes. Then the wig was actually a long blonde wig which I cut, I used paint on the pink side of hair and red Halloween hair spray for a better color and then since it was a blonde wig, to begin with I had to use metallic sharpie and color in the brown side of hair. The last accessory for the costume was the one glove which is just a dollar store glove cut up, sewed a little and painted.

Joker: jokers costume consists of old clothes sewn down to my size. The purple jacket I got from my mom and had to sew down several sizes. The jacket originally only had half sleeves, so I had to use the left over fabric from me cutting down the jacket to give myself full sleeves. The pants are an old pair of pjs bought off ebay for 99 cents. The pants were also too big and had to be sewn down. The under shirt was just goodwill bought and sewn down to fit. I hand made the tie (second one, getting better) and painted it purple and added the diamond design joker had on his. The hat was slightly difficult. The hat is made from left over fabric that is lined with cardboard cereal boxes to keep it stiff. It was painted purple to match the costume and the black strap around the hat is duct tape

Harley Quinn: For this costume I just cut two shirts in half (did not want to have to paint another whole costume) and sewed those together. I did the same thing with the pants. I used two pairs of pants cut and sewn together. I cut all the diamonds out of left over fabric and fabric glued them on the costume. The neck piece and cuffs are white felt that was just hand sewn on with the white pom pom balls. The hat was also my own pattern. I just used the left over fabric for that and lastly used some red fabric to make a slip cover for one of her black boots.

Poison Ivy: Another very time consuming costume. First thing I did was purchase some leaves at the dollar store and outlined all the leaves in green glitter. I tried to find leotard goodwill but only ended up finding a huge gymnastics suit. Sewed the suit down and hand sewed each leaf on the front of the leotard. Had trouble trying to figure out how I was going to do the gloves and pants since I could not find anything in a good color for it.

I ended up finding women’s shirts at Walmart for a dollar and just got two of those xl and used them for the fabric to make both the gloves and pants. I hand sewed the leaves to the gloves and drew a leaf vine in glitter on the pants. For the shoes we tried to make them a little pointy like the movie version so we made slip covers for the front of her shoe out of old socks and tape to give it the pointed look and then slipped the pants over the shoes. The wig was bought on ebay as a plain straight red wig. I added the leaves to the wig and then twisted and bobbi pined the top to look like ivy. The last detail was the green eye mask. This was just made out of foam paper and glitter (designed myself, no pattern) we used eyelash glue to keep the mask on her face.

Everyone knew exactly what we were, even in the dark! Poison ivy didn’t keep her wig on very long while trick or treating and people still knew exactly what she was. We got a lot of compliments and everyone really loved the jokers creepy face! 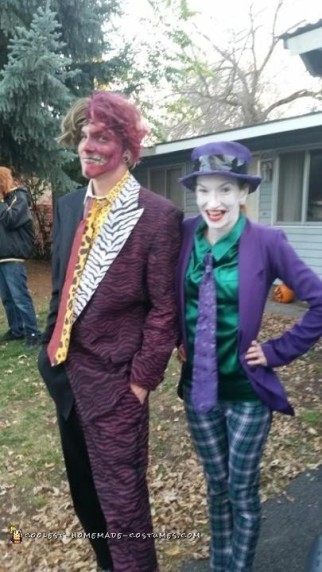 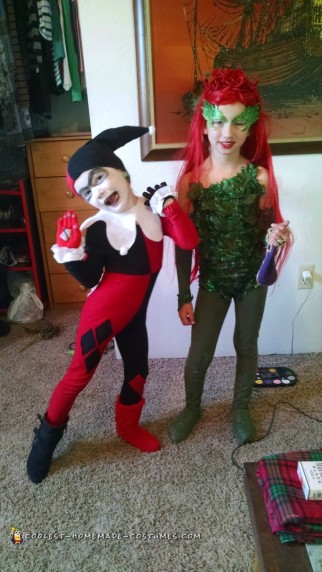