It all started with a Google search of “costume” me and my boyfriend couldn’t think of what to dress up as. We first found the Fred and Wilma idea, but the decided on going with pebbles and Bam Bam instead. We then went to the fabric store for everything to make the clothes with and got the accessories from the local Dollarama (dollar store).

Pebbles:
For her costume, we only needed a few things. We got a pattern for a shirt and pair of pants.
The shorts were made using a basic pants pattern that I just didn’t make the full length. To make them I measured from my hip to my knee and then added 4 inches to the length. That way there was enough to add the elastic at the top and the seam along the bottom. I used a 1 inch elastic in the waist, and a ¼ inch elastic around the thighs. To properly measure these, you should fit the elastic around your waist/thighs snugly (but not TIGHT) just so that it is close to the skin) and then subtract around 1 ½ inches. That will help keep your costume up from falling down. Because of the elastics in the thighs I was able to pull up the bottom of the shorts higher to make it more of a “puffed out” diaper looks.

The shirt looks like it has the “flare out look” at the bottom which is why I made it 3 sizes too big. I then pinned part of the shirt together under my arm pits so that it made more of a flare. Originally, the triangles were going to be made with paint on the shirt but then we thought it might take too long for it to dry so instead we made them with black permanent markers.

For pebbles hair, I bought 2 cans of color hairspray (in orange) and a bag of bones both from the dollar store. I started with using a flat iron because I have very curly hair. I then put it up into a simple ponytail. Using one of the bones I put it in my hair above the ponytail. We then put in the orange hairspray and some bobby pins to keep everything in place. The bone got a little bit of the orange on it, so I just wiped it off with a cloth after wards. I also used a orange face paint stick over my eyebrows to make them orange as well.

Bam Bam:
For his costume we needed a few more things.
First off we got a club and also used one of the bones from the same bag that I had got from the dollar store. For Bam Bam’s hat, we took an old baseball cap that we had and covered it with the same material as the skirt. We also made a few sewing stitches with a piece of yarn which helped make it look older.

To make the skirt I used a skirt pattern that I just changed the bottoms so that I looked like it had more jagged edges. I also used a 1 inch elastic in the waist, measured the same way as above. I then measured from the front side of one hip, over the opposite shoulder, and to the back of the same hip, and added 2 inches. This is for the fur strip that also keeps the skirt up. After I sewed that on, I made two small slits into the front of the fur to slide in the bone.

Although the Homemade Pebbles and Bam Bam Couple Halloween Costume does not have very many pieces, they still took me about 3 weeks-month to finish. I would say that the hat was actually the most difficult to do because you had to make a way to attach all the pieces so that they would still fit tightly around it. However, all in all I had a good time making it, and if I ever need them from another time, I know they were made well enough to last for years. 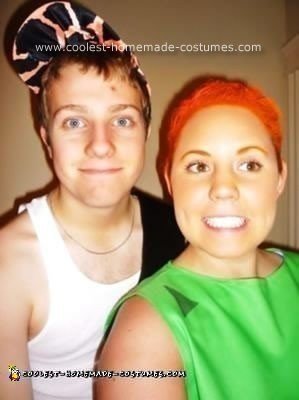 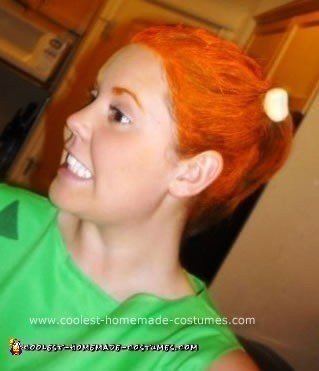