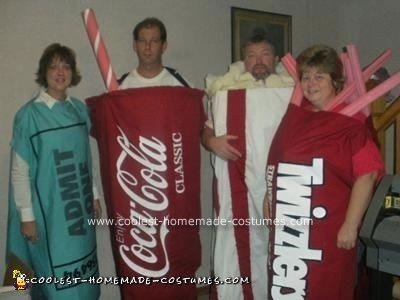 We decided as a group of four to dress up as a “movie package” … box of popcorn, Coca Cola cup, Twizzlers, and the movie ticket.

We used colored flat sheets for the beginning process. They were cut to fit and seams sewn together. We have a heat press in our basement and printed the label for the Twizzlers, movie ticket and Coca Cola and heat pressed them on. The Twizzlers was hand painted in blue for the outline. We used an old spiral Christmas tree decoration for the inner lining of the coke cup and held it up with suspenders. The straw was pin striped with white vinyl onto swimming pool floating “noodles”.

The Twizzler sticks were carved with exacto knives to make them more rigid and use the “noodles” cut in half. They were just tucked into the Twizzler package to portray Twizzlers coming out of the bag. The front of the movie ticket reads on the front “Admit One” and “Ticket only valid during happy hour”. The back side read “Coming soon … Hangover II”. Obviously this is optional.

The popcorn box was sewn with red stripes onto the flat white sheet. An old foam pillow was formed into “popcorn” with an electric carving knife and then hot glued to a natural colored shirt on the shoulders, front and back. Arm holes were made into a large box and the striped sheet was draped over the box and hot glued into the inside of the box to give it the square look on top. It was fitted to show the popcorn above the box.