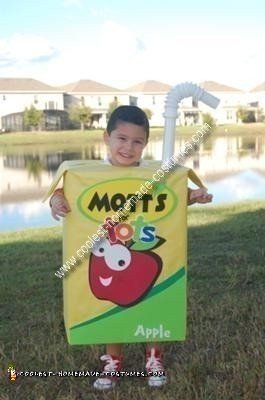 My son loves apple juice and I take joy in making his costumes but I don’t want to pick out his costumes because I like them. I want him to like what he’s wearing, so I made him his favorite drink! He got so excited when I told him he was gonna be a Mott’s Juice Box Costume for Halloween.

I got a cardboard box from my job, went to Craft Store and bought all the colored foam paper I needed, went to a hardware store and bought a plumbing tube for the straw. I cut out a whole for his head and his arms before I began wrapping the box with yellow paper, I taped his arm wholes and head whole so they wouldn’t tear, then I went online to see how the layout would be on the front of box.

I printed out a template as big as I could for the logo, apple and graphics. I cut out the letters and apple and front graphics out of the right color foam and glued them onto box. I cut a hole out for the straw and a base made out of aluminum foil just like the juice box has. Put some cushion inside of box so his shoulders wouldn’t hurt. Got him some red high top sneakers and here is Mr. Motts!