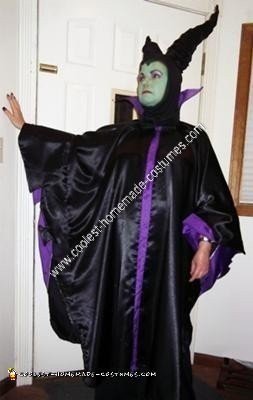 I’ve always loved the character Maleficent from Sleeping Beauty. She’s so dramatic, and I loved her headdress! The scene at the end where she turned into a dragon near the end really imprinted on my brain at an early age. That’s why I decided to make her my costume.

Making the headdress of the Maleficent Halloween Costume would be a challenge, but that was part of the fun! I knew the horns had to be lightweight, so I finally came up with the idea of using something I found in a craft store — kids’ foam craft peanuts. If you dampen one of them and quickly stick it to the other, they will bond to each other. Actually, they seem to be the same thing as biodegradable Styrofoam peanuts which melt when you get them wet. By building those foam peanuts up one on the other, I was able to make two twisted horns. They were pretty solid once they were finished, but I was a little worried they?d get wet and melt, so I sealed them in duct tape. The horns were then covered in strips of black velveteen. I then I got a black ski mask and attached the horns to that with wire and hot glue. (There was a cap underneath for stability.)

I don’t sew, so I did not make the cape but since my mother does she sewed it for me. I gave her a sewing pattern for a generic cape but she winged it to give it jagged edges and purple trim like the illustration.

For my staff, I used a curtain rod that had a glass ball at the end. With a lot of makeup and a good sneer, the illusion was complete! (If only I could have turned into a dragon). 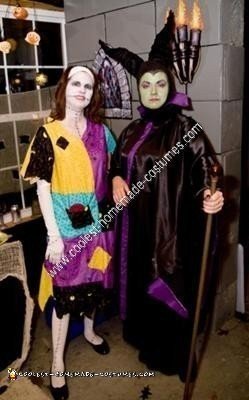 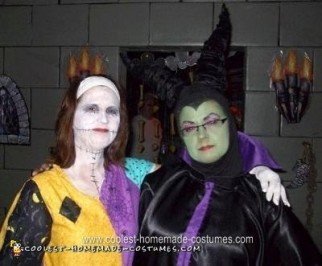 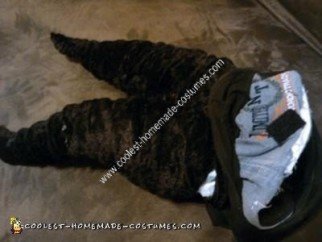