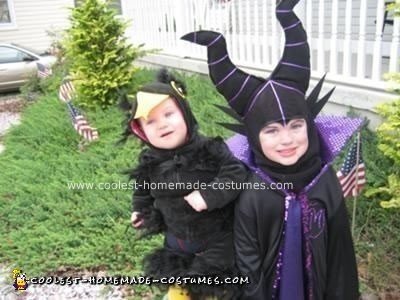 My son, 3 years old, insisted on being Maleficent from Disney’s Sleeping Beauty for Halloween this year. As I was searching for ideas, I came across the Maleficent costume that somebody had already submitted to your website. Once he discovered that that Maleficent was also a boy, there was no turning back!

We also transformed an old Harry Potter robe found at a thrift store into a Maleficent costume. I made a purple dress to wear underneath and sewed a strip of sequence to the edge of the robe for some more flair.

The horns were made from an old fleece scarf that I cut and sewed together. I then sewed them onto a ski hat that already had the face cut out. I also sewed a little ‘v’ onto the hood so it’d hang over his forehead. I embellished the horns with some purple ribbon since every time I showed him the costume he’d tell me, ‘I like the Maleficent in the movie better’ and he’d proceed to fill me in with the exact details of her that the costume lacked.

The collar proved the most challenging for me. I could not get it to stand up! The robe was so flimsy that, whenever I sewed a collar on, it would just fall flat. I finally hot-glued two pieces of stiff felt together in a trapezoid shape for the collar. I then sewed the purple sequence material onto the felt. In order to get the corners to flap down I just broke the felt at the creases I wanted it to have by bending it several times until it finally stayed!

We smeared some gray eye-shadow over his face for the ‘evil’ look, some purple eye-shadow on the eyes, drawn-on eyebrows and lipstick and he was all set!

However, my son wasn’t completely satisfied because he didn’t have a staff and a crow like Maleficent does. So we made a staff out of a dowel rod and a wooden ball that we painted gold and we transformed his little brother into the crow!

The crow was super easy. I found a black-hooded jumpsuit and hot-glued eyes made out of felt and some feathers from a black boa onto the head, chest, waist, and around the legs. I hemmed up the legs of the pants so you could see his yellow tights that I dyed for the feet. The beak was made out of stiff yellow felt as well and I hot- glued that onto the top of the hood.

They got a TON of compliments while trick-or-treating and I have to say I was impressed with the end result of this homemade Maleficent and her Crow costume since I’m definitely not a seamstress! 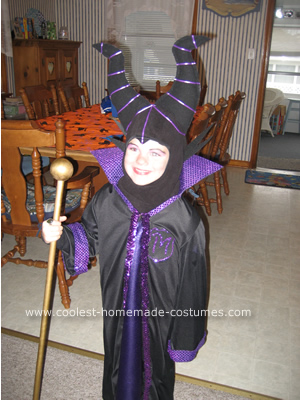 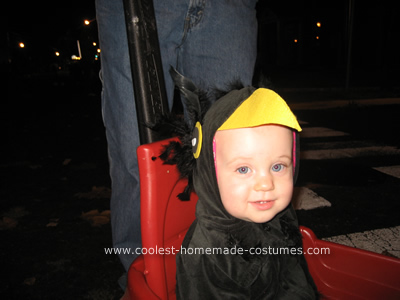 5 thoughts on “Coolest Homemade Maleficent and her Crow Costumes”