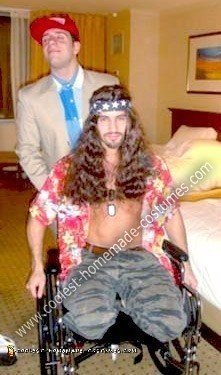 The idea for this homemade Lt. Dan and Forrest Gump costume came from the movie “Forrest Gump”.

The hardest part was getting a wheelchair but I eventually found one on sale for $90 on Craigs list.

Other items bought for Lt. Dan’s costume:
– the wig was a hippy wig found on ebay called the tripping wig, which cost $30.
– $5 dog tags bought on ebay with the name Lt. Dan Taylor written on them.
– two Vietnam veteran bumper stickers found on ebay for $5. These I put on the chair.
– facial hair and women’s eye liner.

The shirt, pants and American flag bandana I had at home already.

Items bought for Forrest Gump’s costume:
– a $30 hat from the Bubba Gump Shrimp Co website.
– a blue checkered shirt won on ebay for $10.

My friend already had the khaki-colored suit at home.

We partied in Atlantic City and the costume was a big hit with everybody. My knees hurt the next day, though, from sitting so awkwardly.