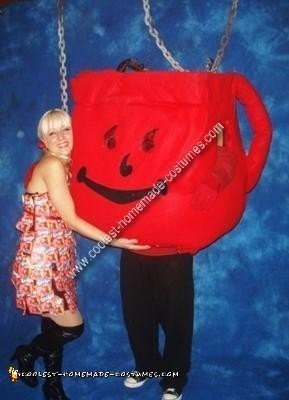 My husband and I decided to do a Kool Aid Man Costume and a packet of kool-aid. Here’s how I made it:

I took a large cardboard box and put two hula hoops in it to make it a round shape- then I shaped it into the shape of a pitcher (using the box and some scrap pieces of cardboard). Then once I had the shape I covered in foam from a fabric supply store then covered it red fabric.

For the eyes it used black felt and black screen so he could see through it. For the mouth and nose I used black felt. The handle on the side is bubble wrap rolled up then covered in the red material. I cut a hole in the bottom of the box to fit over his head then used suspenders on the inside to hold it up on him!

I bought a cheap black fitted dress from a discount store then bought LOTS of kool aid packets and safety pinned then all over the dress. 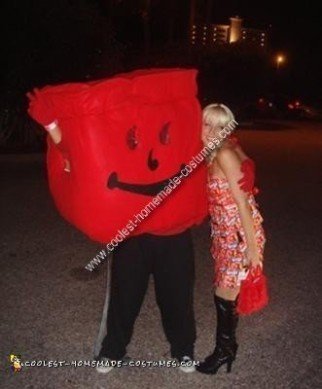