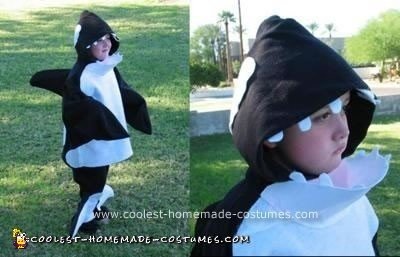 We did an “undersea” theme for our costumes in 2009. My son wanted to be a killer whale.

My son is a tall 6-year-old so I bought a man’s black hoodie sweatshirt. I cut off the front pocket. I also cut off the wrist cuffs and sewed the arms into a point (thus creating the flippers). I glued white felt onto the belly so it wrapped around the sides creating the killer whale markings. I also glued white felt oval shapes on the back of the hood for the eye spots. More white felt was used on the back for the marking under the dorsal fin.

The jaw was made using white felt cut into a pointed oval shape and hot glued just below the neck. The pink felt was used as the tongue and simply folded over, glued at the edges (so it would stand up better) and hot glued at the neck of the hoodie to create the mouth. The teeth were cut out from more white felt and hot glued onto the top hood edge and the top of the jaw.

The fins were made by sculpting Styrofoam into the right shapes then spray gluing black pillow case material over them. The dorsal fin was then hot glued directly onto the back of the hoodie. We glued white felt to the inside of the “tail” fins at his feet and velcroed them around his ankles so he could walk.

It turned out amazingly well. He could walk in it and, luckily, it was a cool Halloween night in Phoenix so he was warm but not uncomfortable.