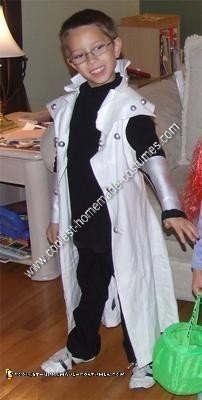 The base of this homemade Kaiba from Yugioh child Halloween costume idea was a woman’s dress from Goodwill. The zipper was removed and the dress cut down the middle, the front of the jacket is actually the back of the dress. Darts were added to bring in the waistline and make it fit a child better.

The upper and lower collar and shoulder “flares” are made from this stiff fabric called “rubber sheeting” purchased at Jo-Ann Fabrics #400014913158. It’s like the material that a baby’s changing cloth is, a good suggestion if you didn’t want to buy the real stuff as it was 9.74/yd. I bought 1/3rd of a yard. Other options to get a collar to stand up would be to use foam or foamie sheets as I did in my other Yugioh costume. I made the pattern by putting a piece of paper on my son’s shoulder and then cutting it to shape.

A really fun thing to make on this costume was the silver nobbies. They are made from this stuff called “Sculpy”. Very cheap and a little goes a long way, I made 16 from one package that cost between 1 and $2. I molded balls, cut them in half w/dental floss (so I wouldn’t smash the ball) then lifted a little area in the middle so I could sew them on later. You put the Sculpy in the oven and bake to harden. After it was hard I painted it silver w/spray paint and then sewed them to the costume.

Arm gauntlets are made from grey foamie sheets cut to fit, spray painted silver and then Velcro to attach and detach. I ran out of time, but I had purchased dark blue foamie sheets that I was going to cut into strips that go around the arms and legs (see ref. pic.).

Black turtleneck purchased from Walmart, and tight-fitting pants (they are girls – shhh) were purchased from Goodwill. The pants were great because they don’t show a button and have no front pockets. 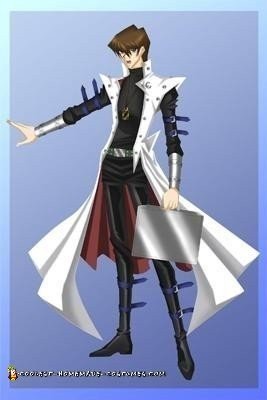