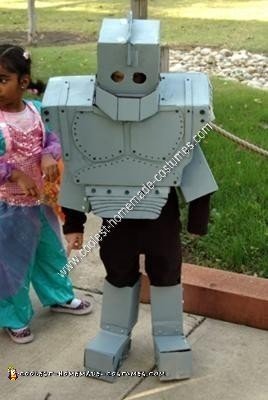 This year my son wanted to be Iron Giant. I only found one example of a Homemade Iron Giant Costume online, and that one was made of Styrofoam, so we had to come up with something else.

I decided to use card board boxes. At first I thought I would cut separate pieces for the front and back and connect them somehow, but I was able to find a box that was narrow/shallow and cut the opening for the head out of one end and put it over his head. I then cut the basic torso shape of the robot looking at pictures.

I then cut additional cardboard pieces and layered them on top of the base shape, to create a more three dimensional look. I painted everything with grey primer and attached all the pieces together with various sized metal bolts and screws. This really added great detail to the costume and made it seem more like a real robot. I also used black marker to draw in additional detail for the robot.

I was really fretting about how to make a rounded head for Iron Giant, but my son picked out his own “helmet” shaped box, so I was off the hook! We added the mouth piece and attached it to the back of the costume with bolts so that it would swing up over his head, but could hang off the back easily when he was not in character.

I had him wear black sweats, and cut a narrow tube box for the arm and leg/feet pieces, adding additional bolts and screws for detail. I stapled black tube socks inside the arm and leg tubes (cutting off the foot part) so the pieces would stay in place, he just slid his arms and legs through and wore the pieces. We did have to duct tape the shoe cover to his shoe so it didn’t flop when he walked.

My son was really happy with the end result. The only drawback was that the costume was a little heavy (because of the bolts and screws) and my son couldn’t move around easily when in costume. 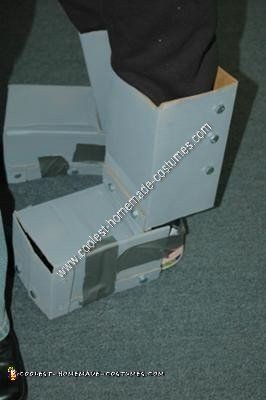 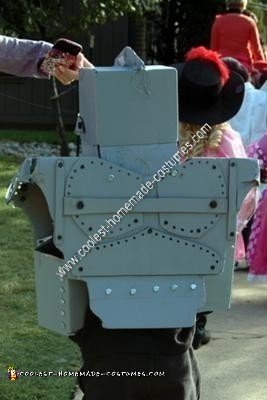 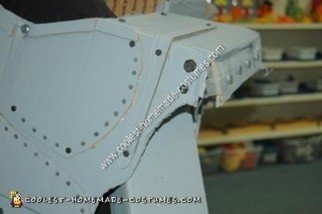