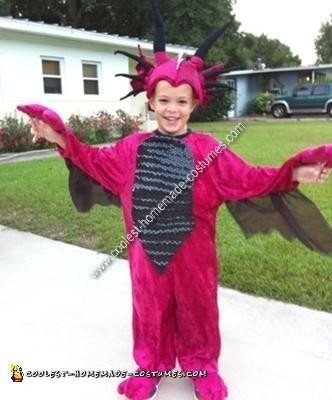 My 4 year old son really wanted to be a dragon for Halloween this year but every costume I found was too “babyish” for a 4 year old so I decided to make a costume for him.

The first thing I did was look for ideas, and came up with this homemade dragon child Halloween costume idea. I purchased the mask/hat online. Once the hat came in it was off to the fabric store. Luckily I was able to find fabric that matched the hat almost perfectly.

Since this was the first costume I have ever attempted to make on my own I decided I needed a pattern for reference. I wasn’t able to find a dragon pattern so I purchased a dinosaur pattern and modified. I didn’t realize that patterns come in sizes so I accidentally bought a pattern that was too small at first and had to exchange it.

The body suit and tail are a lightweight cotton/knit blend material. It made the costume very comfortable and easy to move around. The tail and spikes are stuffed with stuffing giving it some dimension. I sewed a belt loop into the tail on the inside to help hold it in place. The body suit zips in the front behind the black belly of the dragon. This made it easy to get on and off with the tail in the back. The belly velcro’s over the zipper. The belly and spikes are made of a shiny black material with little squares. This made the belly and spikes look more authentic. I sewed the fabric back to back with batting in between then sewed lines across it to make the creases of the dragons belly.

I didn’t want my son to have to worry about losing gloves or shoe covers so the hands and feet are both sewed to the costume and stuffed. The hands have elastic sewn in like a ring that he put his finger thru to hold it in place over his hand. The feet have elastic that go around his shoe.

The wings are made of a sheer black material that has red swirls on it. This really gave the wings some contrast and brought out the red in the wings. My son loved his homemade dragon child Halloween costume idea and received several comments on it. 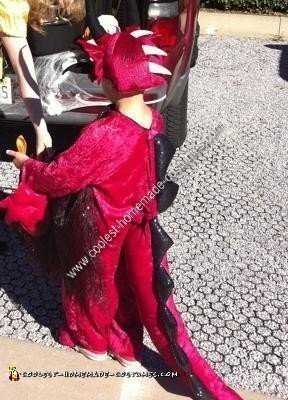 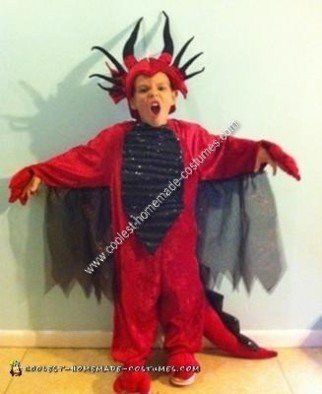 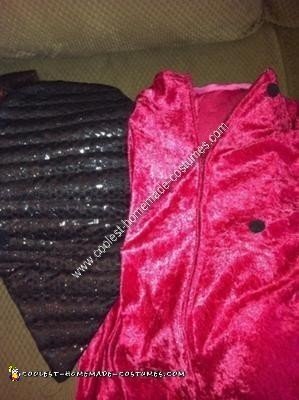