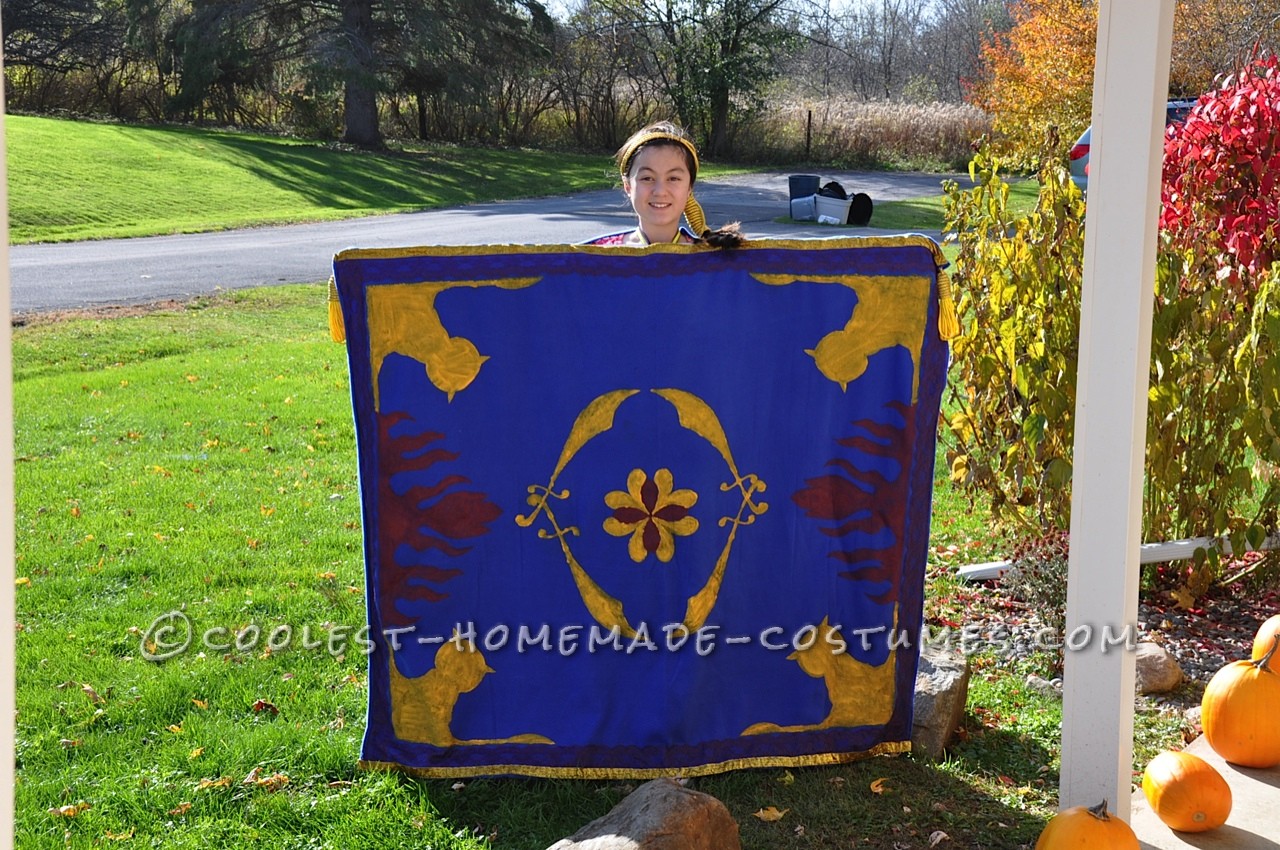 To make Carpet, first we had to get gold colored ribbon used for the top and bottom of Carpet, purple lace used for all four sides of Carpet, yellow fabric paint used for tigers and swords and decoration in the middle, red fabric paint used for the fire on sides and decoration in the middle, 2 four-foot blue material sheets, purple thread for sewing the lace on, blue thread for sewing the sides and top of Carpet, yellow paracord to make the tassels and to hold up a wooden dowel or something else long and sturdy, a glue gun, and gold rope for making the tassels and for my hairstyle. What I did was set up the project.

I got out the fabric sheets and blue thread, and my mom straightened the sheets and lined them up properly. Then I started sewing one side of the two sheets. When that was done, my mom pinned the purple lace on all the sides and pinned the gold ribbon to the top and bottom of the sheets. My costume was going to be a sideways Carpet. I sewed the lace through only one of the fabric sheets, because if I sewed through both of the sides, then it would be impossible to wear. There would have been no way to get into the costume.

I did the same for the ribbon. It was difficult to do that part because sometimes I accidentally sewed through both sides, and I had to undo it. I also kept getting big knots stuck in my thread when I was sewing, and I had to undo them. The side that was already sewn together was the hardest part to sew the ribbon and lace to, because I had to be careful not to sew through both sides. You might be wondering why I sewed the side of the fabric if it was just gonna make the project harder than it already was. It’s because my mom told me to sew the side and then when I finished sewing, she realized that I shouldn’t have done that, but we left it anyway because my mom knew it would still work. It just wouldn’t be as easy as the other sides.

My mom put pins through both of the sheets so that I knew where she didn’t want me to sew. Otherwise I wouldn’t have armholes and a space for my head. Then, my mom had me sew the other sides together except for the bottom, and then I was done with sewing. While I was sewing, my 4-year-old brother came in the room singing along to a song, bobbing his head side to side, and closing his eyes. He was also having a discussion with my sister. My sister said this: “Look. This is a praying mantis picture. This is what I am going to be for Halloween.” Then my brother replied: “No. It’s a cwicket.” (He was really saying cricket but he can’t really say his R’s that well.) “You going to be a cwicket for Halloween.” We all laughed. It was hilarious.

Next, I had to make a stencil for the design of Carpet– the fire. My mom made the other stencils– the swords, the decorations in the middle of Carpet, and the tigers. Then she traced out the stencils on white poster board, and then she cut out the stencils with an art tool. I cut out the fire with the tool. I didn’t do a very good job though. I cut myself with the tool a little bit by accident and I cut outside the lines with the tool. I got upset that I wasn’t as good at cutting out the stencils as my mom was but I got over it. Next, my mom asked me to go into the basement and get some paintbrushes. When I brought them up, my mom got the stencils in place and then my mom, my sister, and I started painting. We stayed up late to finish the project.

The next day, October 31, my friend came over to trick or treat with us and I was finishing up my costume. I had to sew the top of the costume. My mom put pins down where she wanted me to stop sewing so that there was head room. When I finished sewing the top, my friend’s mom helped my mom make the tassels for Carpet, and then my mom sewed them to the costume. Wondering why my mom had me wait to sew the top? It’s because my mom had to sew the paracord loops to the costume. She sewed the loops to one sheet of fabric and only one, because otherwise I wouldn’t be able to get into my costume.

Then she put the wooden dowel through the paracord loops. The wooden dowel wouldn’t stay up without me holding it up the whole time, so my mom took two elastic headbands, one purple one and one yellow one and slid each one onto the wooden dowel and pulled it over my head. And it worked! I showed the finished costume to my sister and brother, they said that they liked it, they thought it looked like Carpet, and they thought that I would win a prize. My mom thought it turned out nice and that I might win a prize.

My friend and her mom said “Wow! That turned out nice! I think you will win a prize!” You see, every year on Halloween, the fire department has a costume contest. I didn’t win though. I think it’s because they thought I was a tapestry. The categories for winning are cutest, most original, scariest, and funniest. Lots of people there asked me if I was a tapestry. Although, some people at the fire department knew that I was Carpet. One of the women there said that she liked my costume the best out of all the costumes there.

When we went trick or treating, I told all the people that my sister’s, brother’s, little brother’s, my friend’s, and my costumes were all homemade. All the people that I told said that they liked the costumes. This costume is only decorated on the front. We didn’t have time for the back. We made it so that I can use it as a blanket on my bed.