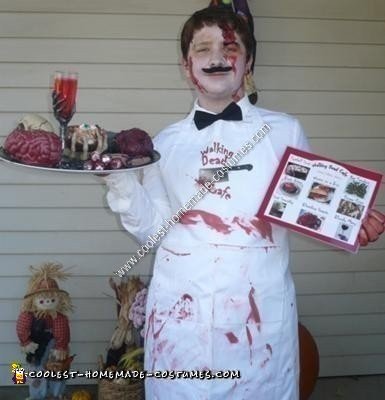 My son always enjoys dressing up in homemade costumes every year. As we trick or treat through a sea of store bought costumes, he loves hearing over and over again how original his costume is or how it is the best costume of the night. The problem is, every year it gets harder and harder to “top” the year before.

So, this year we were walking through our local Halloween store trying to get some ideas when we ran across the butcher’s section with the brains, the hearts, the severed fingers and an idea was born! We have all seen the dead butchers, but we could use these items and we thought of a homemade dead waiter Halloween costume idea. We quickly came up with a name for his restaurant- “Walking Dead Cafe”. We purchased brains, hearts, fingers, rats, eyeballs and other odds and ends for our tray. He insisted that he also needed a mustache too!

We designed and laminated a menu. Our restaurant was serving- Bleeding Hearts, Brain Bites, Rat Tenders, Finger Fries, Eyeball Soup, Worms on a bun and Bloody Mary’s, which we arranged on his serving tray. We applied his bloody make-up and mustache and we had the head waiter at the “Walking Dead Cafe”! He loved the attention he got and was told many times “Hey, that’s not what I ordered”!