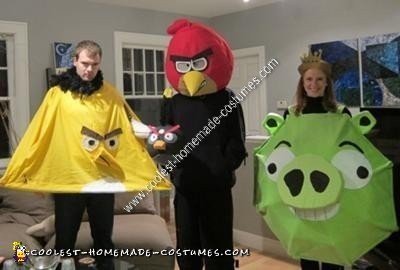 I have to admit, we were struggling to come up with a creative costume idea this year. We racked and racked our brains for something current and topical, but we came up with nothing short of the cast of Twilight. We were about ready to settle on Edward, Bella, and Jacob when a marvelous opportunity came upon us. I am an avid player of the iphone app “Angry Birds,” and (having already beat all the levels on the regular game), my friend informed me that there was a special Halloween Edition. My natural reaction to the newfound news was to instantly text my fellow avid Angry Bird player… my brother. The text read “Halloween Angry Birds.” That’s it. It was then that I realized that this text could have another meaning entirely.

At that very moment, the same genius idea dawned upon me and my brother. We would be Angry Birds for Halloween! This marked the beginning of a great journey of costume making. My brother and I quickly convinced my husband that this was the way to go, and assured him that it would be well received. We spent an entire weekend immersed in sewing, hot gluing, and spending lots of money at Jo-Anne’s Fabric. In the end, we had three masterpieces. For the most part, we each created our own costume (but occasionally enlisted help from one another). We all had a different vision in our minds, but I feel the final products complimented each other rather than not. I went as the infamous piggy (who stole the birds’ eggs… hence, their anger), my husband went as the red bird, my brother went as the yellow bird, and we made an extra “bomb bird” just for kicks, and because we felt as though we needed to have it.

Then, Halloween night we roafamed the streets of Washington DC. Everyone went crazy! We couldn’t walk 3 feet without hearing someone shout, “ANGRY BIRDS!!!!” It was quite an exhilarating sort of celebrity feeling. Anyhow, now here I am on coolest-homemade-costumes.com ready to share our lovely Homemade Angry Birds Halloween Group Costume. Enjoy!