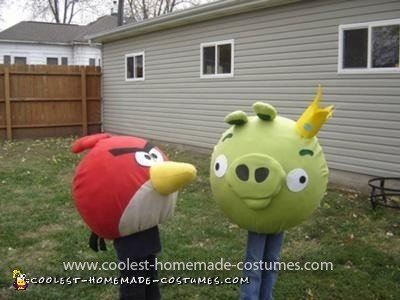 Halloween is one of my favorite holidays, so when my kids wanted an Angry Birds costumes, I was up for the challenge. My first challenge with the costume was to come up with a costume that was cheap, easy, and anyone can do!

Then I needed to find a ball shape that could fit over a small child. I tried everything from Hula hoops to stacking rings, none of those worked. I thought of a piñata, and watched some videos on how to make them. I had a pretty good plan, but I needed a ball shape to be big enough to fit over the kids. I found exercise balls that were perfect size (55-65 cm) at a local Wal-Mart.

I then ripped newspapers into 1-2 inch strips, and mixed a batch of “glue” by using ½ water and ½ flour mixtures. You can also use water and glue mixture, but the flour mix is cheaper, and works as well. This process is very messy! I aired up the exercise balls, and made sure not to cover up the air hole, so after the paper mache was dry I could deflate the ball without breaking the ball form. I used about 5 layers, making sure to let every layer dry before I put another one on.

After you get the thickness you desire, deflate the ball, and you are ready to decorate it. My 6 yr old son wanted to be the red bird, so I made the eyes, beak, tail, and brow by drawing them on paper and tried to make them proportional to the ball form. I used 2 yards of fleece to cover the bird itself. I glued the ends of the material up into the form.

The eyes and eye brow were made of felt. The beak was made of fleece and I stuffed it using poly fill. My son had to see out of the costume, so the eyes of the bird are made of screen, so he can see out without anyone seeing his eyes. I glued the eyes, brow and beak to the body, and stitched it in some spots for more support.

The hair feathers and tail were also hand stitched. My 10 yr old daughter was the King Pig, and was done the same way, except the eye holes were actually the pigs’ nostrils. I made the crown using poster board.

All in all, I made both costumes for around $25.00. My kids loved them and everyone else thought they were awesome, too! 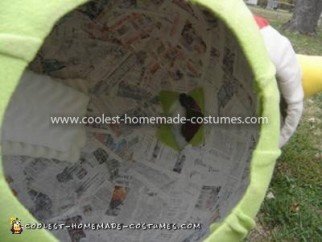 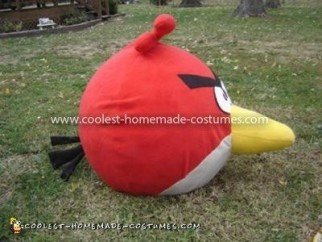