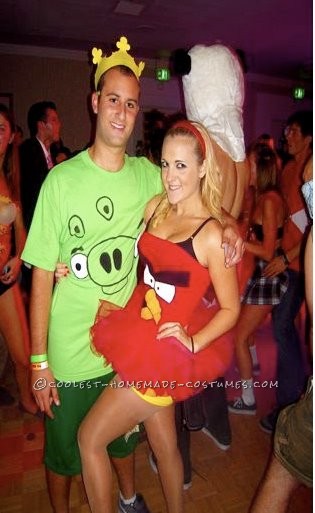 Every year my boyfriend and I do something fun for Halloween. This year we decided to go to a Halloween yacht party so we thought it would be only appropriate to have matching costumes and not something cliche like a captain and a sailor. I don’t know how he came up with the idea because it was before being an angry bird for Halloween became the popular thing to do but when he mentioned it to me I thought it was brilliant! Luckily we lived down the street from this cool store called T-shirt Warehouse and a Michael’s craft store so it only took me one trip!

At the warehouse I bought a red tube top, yellow shorts a red tutu, and white canvas shoes for me. I also bought a green tshirt and green shorts for him. At Michael’s I bought some fabric paint that was under a dollar a bottle so I got black, yellow, and white. All in all the costumes together cost me like 30-35 dollars, which was great cause being a college student I don’t have a lot of money to spend.

I also went to a Burger king and asked for one of those paper crowns they give kids on their birthday. I painted the crown yellow and the face of the pig on the green shirt and that was that for his costume! Easy enough! Then I painted the face on the bird on my tube top and painted my shoes yellow and poof I was done! Later that week I went to target and noticed they had red nail polish and a red glittery head band in the dollar section so I thought why not.

Everyone loved our Angry Birds costume for couples at the party especially my sorority sisters and it felt great knowing I didn’t have to drop a bunch of money! 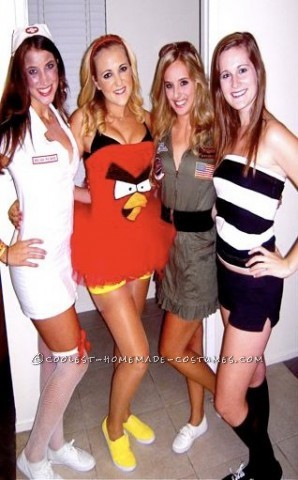