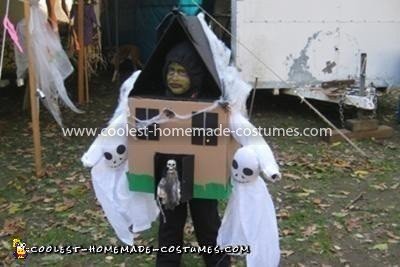 My son loves looking at the coolest-homemade-costumes.com website and when he saw the haunted house costumes he decided that is what he wanted to be so this is what we came up with. I started with a plain cardboard box. Hot glued a piece of black foam board in the top opening with a hole cut out for him to get his head through. Added the roof with black foam board. Then I added windows and doors using black card stock. I put a small skeleton guy I found at the Dollar store in the door way. I also used a couple of the electric tea light candle lights as candles in the windows by making a small hole, putting the candle tip in the hole and hot glued them on the inside of the box. That really added a lot.

I also used cob web and spiders as well as a bat on the roof which was also from the Dollar store. For his arms I cut holes in the sides and glued on some white sleeves I cut off an old sweatshirt. Then I glued some ghosts found at the Dollar store to the bottom of the sleeves so they hung down when he put his arms out. We just painted his face and had him wear a black hooded sweatshirt.

I think this Homemade Haunted House Costume was our cheapest costume yet but so far the coolest one I have ever made. He won the scariest costume award in a costume contest that included close to a 100 kids. He complained at first that the box hurt sitting on his shoulders so I glued some padding in there to help make it more comfortable and he never again complained about wearing his costume. He had so much fun trying to scare people!