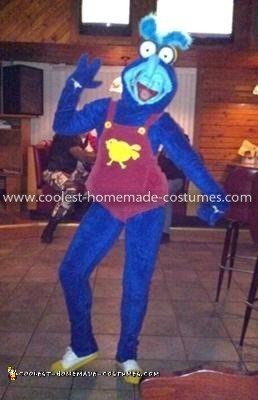 Based solely on the mental image of one of my masculine, tall male friends dressed as Miss Piggy, I urged my friends to join me in dressing up as various characters from the Muppet Show. Everyone agreed, but one of them only under the condition that we were characters from the spin-off of the Muppet Show, the popular and very 90’s cartoon the Muppet Babies. She wanted to be the headless Nanny (seen in below/above in photos).

Baby Miss Piggy and the Nanny were taken, so after that I had free reign in terms of character choice. I love Halloween and enjoy a challenge, as well as being as androgynous as possible on Halloween night, so naturally I chose to dress as Baby Gonzo. Baby Gonzo is the blue alien with a long, somewhat phallic nose, eyes on top of his head, pot belly, and antennas.

My costume was completely homemade; most of the costume was sewn, but I did use a fair amount of hot glue for the head. I found the fur at a fabric store for $4/yd and only used two. With the fur, I sewed a shirt and legs. I also made gloves with three fingers, for authenticity and, of course, warmth (gets cold Halloween night!). The gloves were attached via elastic to the shirt so I wouldn’t have to keep track of them all night.

The red overalls were made from a red corduroy shirt I found at Salvation Army. I attached these bibs to the blue furry legs and made the straps fully functional for bathroom purposes. I lined the overalls with some spare fabric I had and then stuffed them so that I would have a pudgy midsection.

The head’s base is a plastic jack-o-lantern (the kind kids use for trick-or-treating) that I found at Walmart for $1. I cut the bottom out and a hole for my face then added batting to create shape and thickness. I then covered it with fur. The eyes were styrofoam balls from the floral section of Walmart with a couple of layers of batting and then the googly eyes added on.

Baby Gonzo’s eyelids are made from black and yellow foam that you can find in any craft store for less than $1/sheet (only used one sheet of each). I used lighter blue felt to line the facial edges of the helmet to better make the transition from my painted face (Gonzo’s lighter blue face) to the furry head. Here, I added the long curved nose that I sewed with the same felt and stuffed. And finally, Baby Gonzo’s antenna were ends of a boa glued onto some wooden skewers I had laying around and then glued onto the head.

I found some simple white shoes at The Goodwill/Salvation Army and added the yellow detail with felt. The face paint is simply cheap acrylic craft paint with a tiny bit of soap and lotion added in… this is much cheaper, stays on longer, and comes off easily!

This Gonzo the Muppet Baby Costume was easy to walk around in, eat and drink, etc. It was quite comfortable and the fur kept me very warm! … Kermit got awfully cold. Baby Gonzo and the rest of the Muppet Babies drinking and carrying on at a party made for some pretty good scenes as well as opportunities for the Nanny to come over and “check” on us. We had lots of fun with the theme. I even sang the Muppets’ theme song at a karaoke bar dressed as Gonzo. And my favorite was wearing it to work, a psychiatric hospital; the patients loved it! 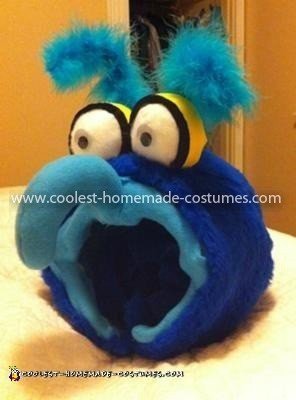 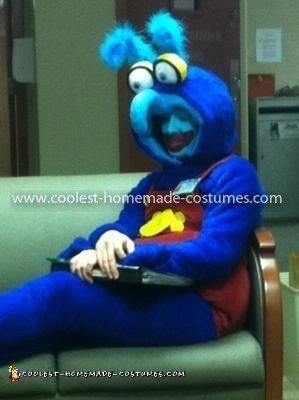 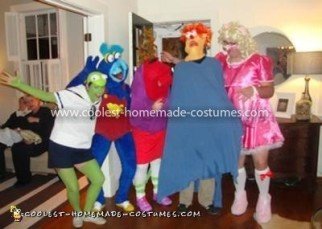