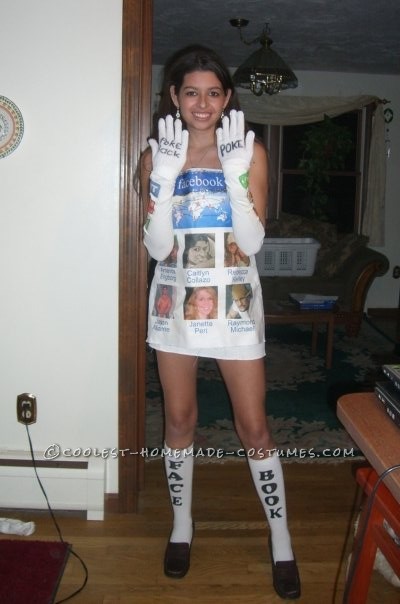 I am a huge holiday nut and get super excited to hand make my costumes each year- only the most original and creative with a sexy twist will do! (Lol let it be known that I was the first one on the site to come up with Facebook and using iron-on transfers.) This Facebook costume in particular was by far one of my greatest and most popular. I got tons of compliments on how I really looked like Facebook! Plus, I met the trifecta of the perfect costume: I was recognizable, creative, and applied the effort. My gloves that said “Poke” and “Poke Back” were a huge hit, especially since I got to literally poke people with them! I can’t even tell you how many people asked to take a picture of me or with me, because there were too many to remember! Overall, I am happy to say that the costume was a huge success and everybody loved it.

To start, I blew up pictures of my friends and typed their names in a Facebook font. My favorites were the ones of me and them.

After printing those, I printed out the most featured apps; I only wish I got a better shot of them, but you can kind of see them in the pictures.  They were symbols like the one for messages and stuff.  Next, I printed out the global picture from the Facebook home page and a Facebook logo. 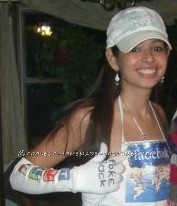 Afterward, my “secret” and basis of the costume was to use T-shirt transfer sheets to transfer the images onto a white apron (which I put over a white mini skirt and top) and white sleeves I cut out of a long sleeved white top I never really wore, and used iron-on letters to spell “Facebook” on my knee highs. 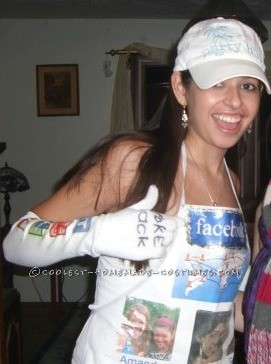 I was so into this costume, I even used silver glitter puffy paint to border the Facebook logo for added effect.

Lastly, I finished this costume up with gloves that said “Poke” and “Poke Back.” (Huge hit!) *Note: I wore a white tube top and mini skirt for this costume, but if you don’t have these items, you could easily do an alternative version in a duct tape dress. 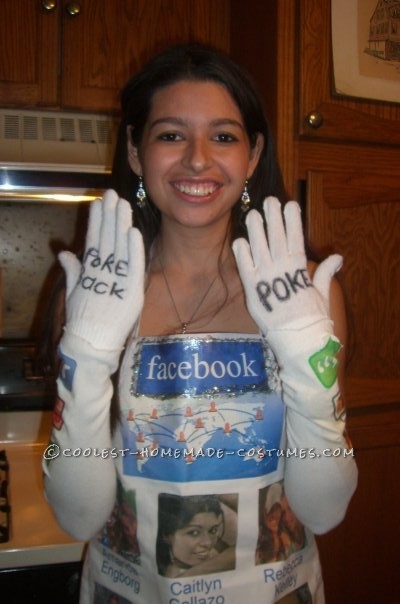