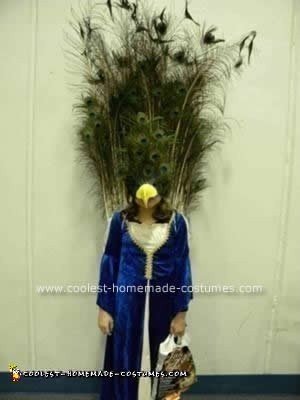 This Do it Yourself Peacock Halloween Costume was inspired by my daughter, Savannah, who loves peacocks. The dress was a piece of a princess outfit that she had worn a few years before, but everything else is homemade.

I purchased two items from the Dollar Store, the angel wings and the hat with a beak on it. The feathers were collected at Savannah’s Aunt’s house where she raises peacocks in the wild. The peacocks lose their feathers naturally, so no peacocks were harmed in the production of this outfit. I arranged the feathers in an attempt to replicate the pattern of the real peacocks. I attached the feathers to the wings using hot glue. I modified the hat by taking off the bill, cutting eye holes in the top and attaching feathers to create a crown type effect.

Savannah absolutely loves her outfit! People always want to take her picture and exclaim about how original her costume is!

Prettiest Peacocks at the Costume Party