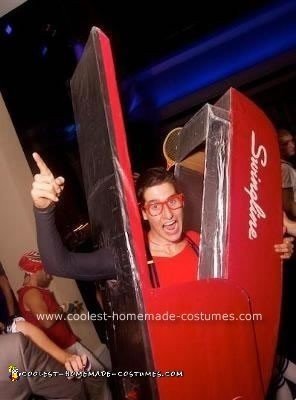 The construction process took place over a weekend, and involved getting 4 bike boxes from a cycling store, and about 8 rolls of various tape. I had one of these staplers at work, so I quickly took some measurements of the length, width, and depth of the stapler, and took the same measurements of my body and torso to come up with some proportional gigantic ratios to build this stapler. Turns out the stapler is to scale and about 10x larger than the office desk version.

I drew some rough blue prints of the shapes that I needed to cut out and then transferred the 10x larger sizes onto cardboard. Then cut them out and assembled them, using extra tape where ever I could. I used a 2” PVC pipe for the pivot and drilled holes accordingly into the cardboard frame. I also made washers for the stapler to rest on and pivot on out of Plexiglas by drilling two different diameter holes. The pivot runs right between my legs, when I am standing up. I then cut out some arm and handle holes for me to rest the stapler on.

Then came wrapping the costume in black and red paper and tinfoil using spray on glue and clear packing tape. I also stenciled on and then painted the Swingline logo for authenticity. I went on to wrap the entire costume in clear packing tape to give it a good sheen and make it party proof.

Making the Hilroy paper was much the same process, except there was more painting to be done with water-colour paints to make the blue and red lines. To add the finishing touches, I cut up some wire to make 12” large staples to carry around as props and to stick one into the corner of the Hilroy paper.

Being able to function this costume was great. It was a party favourite, everyone wanted to have their heads stapled by a giant Swingline, and we posed for hundreds of pictures at several events. 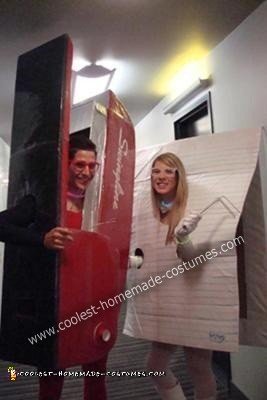 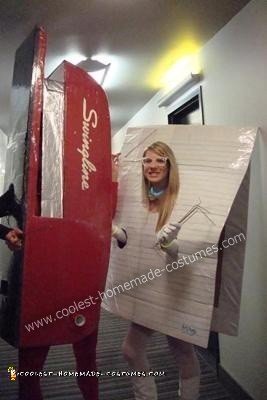 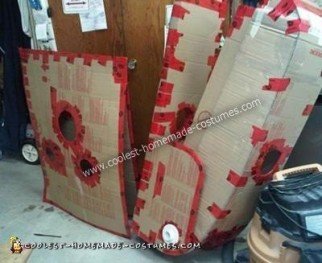