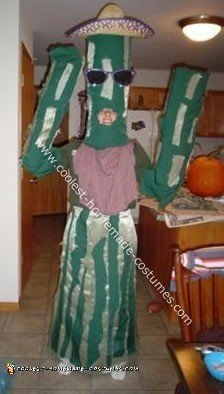 I was sitting around thinking of a great idea for a costume and remembered my boyfriend telling me a story. His mother had a Cactus ornament on her antenna of her car. Cactus Cowboy Joe, was the name they gave him. They had taken this ornament off of her antenna and held it for ransom; for a pan of his mother’s brownies. I thought that was pretty funny. Than I thought to myself, that that particular ornament would be hilarious as a costume. I try to be very creative each year, and this cactus antenna costume was going to be my best yet.

I went to the local fabric store to figure out what I would need to make it work. I wanted it to be big, yet functional. The first thing I thought of was foam. (I used foam in my past costume to make the hair for Marge Simpson.) I didn’t have a lot of money and the foam was the most expensive part.

I than went to the local 2nd hand store to find fabric. I found an old bride’s maid dress; it was two sections. I also found two table cloths that was the perfect green. I had a Chi Chi’s hat from college in storage that I could use. The last two parts of my costume was to find the Huge clown glasses and a huge bandanna.

I scope out a pair of sunglasses at the second hand store. It was Halloween season and everyone was in that section looking for fun stuff to wear. I saw this guy with the clown glasses and hoped he would not buy them. And soon he put them back. I ran across the store and snatched them up and bought them. It was the most aggressive moment of trying to find all parts of my costume.

I went home to begin the process. I tied the foam for the head and arms with string and sewed the fabric around the cylinder shapes. I took the top part of the bride’s maid dress and shredded it. To make it look like the spikes on a cactus. I cut holes in the fabric for my hands to go through and a hole for my face. Like I said before, this had to be functional so I could talk and open doors. The bottom part of the dress made the bottom part of the costume. I used fabric glue to put the strips on to make it more dimensional.

For the bandanna I used my boyfriends old flannel shirt to tie around my neck. I sewed the hat to the top of the head and sewed the sunglasses over the mouth (also the hole for my face).

That is how the cactus antenna costume was made. It is funny to walk around and the best when I dance. I hope you enjoy my story and how it was made.