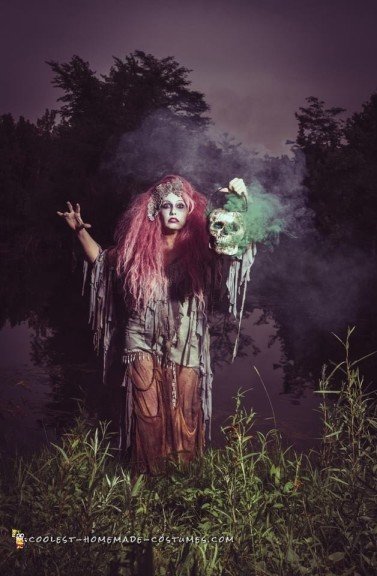 I had such a fun time making this costume, and it was a bit of a challenge as I decided that I was going to limit myself to what I had on hand. I had a finished completed costume from years ago, and I wanted to keep some elements but change a whole lot more, so I took apart the entire costume and created a new one using scraps of the old, plus what I might have in my supply closet.

I’ve been obsessed with those ethereal ghostly beings for quite some time but felt the most common of the spirits were ghosts. I wanted to do my interpretation of a banshee, whose screams foretold of death. The first thing I do with any costume is pick my colour scheme and I was in love with layers of grey. There are several different tones of the same colour that come from using different fabrics as well as air brushing and hand dying.

The base of the costume is a 1960’s full body foundation. I just seem to have a lot of vintage undergarments looking for a new lease on life and I love the way they fit and the surprising amount of movement I can have in them. I wanted a definite look of deterioration in the wardrobe, hence all the hand cut holes in the train of the costume as well as a ton of raw edges and ripped and torn bits. I needed the hair to be disheveled and long, trimmed with that hint of beauty in hair fascinator.

I used a lot of pearl detailing such as the beaded collar which was something I picked up at a garage and the pearl trim on the drop waist. I wanted a forgotten elegance in this costume, that perhaps this was once some beautiful dress on a beautiful lass that had become ravaged with age and tragedy and stood before you, some serene nightmare that held you frozen.

But truthfully the real fun came in wearing the costume, which of course I got a lot of compliments at parties, but we went to photograph the costume at a lake and we attracted quite the crowd, including the park ranger. Some people thought a horror movie was going to be filmed there (despite there being just me in a costume and my friend shooting the camera!) I wanted to shoot this costume in the water and was determined to face whatever horrors might lurk in the lake. But I was not prepared for the angry beavers! Just imagined me in this costume, wading further out into the lake trying to “get that perfect shot” until finally I’m waist deep, trying to artfully drape myself across this log when there is a huge splash right behind me! Naturally a rowboat with two gentlemen stopped by to inform us we were near a beaver nest and they had young ones. Between that, the smoke bombs gone awry and the park ranger taking my photo and texting everyone back at the station; it by far was one of my most successful costumes! 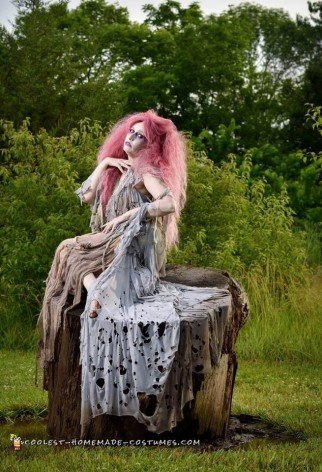 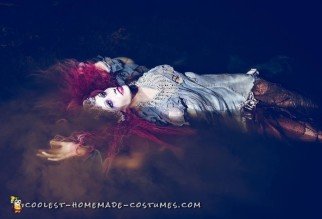 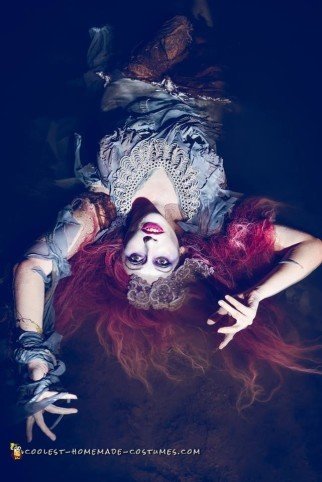 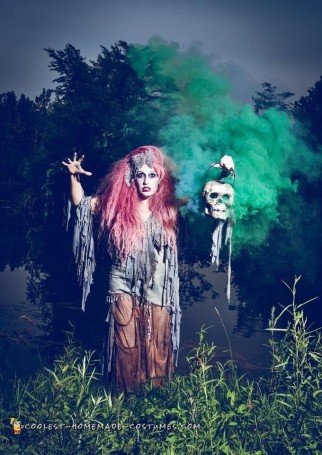