For this Animal Costume, I first cut out a large circle out of cardboard (about 19 inches in diameter). Then I measured the circumference of my head and drew a circle that size inside the larger circle that was already cut out. I cut an “x” out of the small circle and folded the flaps up, so that the large cardboard could sit on top of my head (like a hat).

To make the eyes and nose, I used Nerf balls bought at the dollar store and covered them with white and red felt respectively, and hot glued them to the dome. I then used red, pink, and orange boas for Animal’s feathers. For his expressive eyebrows, I used a black boa.

For the bottom lip, I made a tube out of orange felt and stuffed it with fluff. I hot glued the ends to the head.

For the inside of the mouth, I used a piece of black felt and a piece of pink felt for the tongue. I made sure there was a space for me to see out of. His teeth are simply made out of white felt.

For his attire, I cut an old pair of jeans in a zig-zag shape, and I happened to find an Animal shirt in a store which I also cut. I wore orange tights and an orange shirt underneath the t-shirt. His large sneakers were lent to me from a friend and the chain necklace I found in a “punk rock” store downtown. I painted a pair of gloves I had orange.

This Animal Costume was a lot of fun to make and to wear. 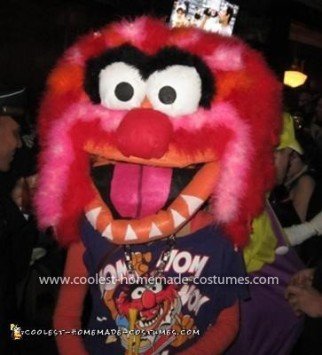