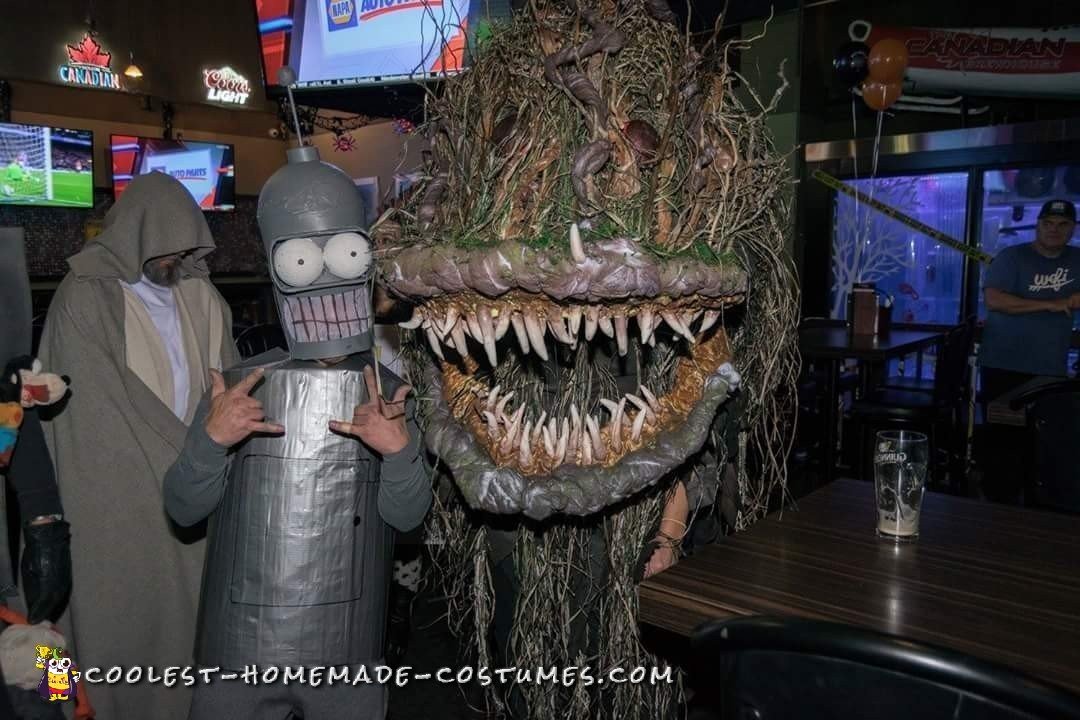 I got the idea for this costume from Pinterest. We began by drawing the plan on how to create this frame and the dimensions. Our first plan was to use paper Mache but this would be quite hard to attach so many materials to without it falling apart. So, we decided the only way to securely attach everything would be to use chicken wire and a wooden frame.

We purchased a sheet of 1/8 “plywood and chicken wire. We used an old backpack and cut the bag out to use the straps and was screwed onto a frame we had built. It was somewhat good support but I would have used one with a strap that wrapped around the body as well.

The frame was cut into V and U shaped panels that were hollowed out. The main panel that was attached to the backpack straps was solid. All the panels were made just a couple inches smaller on the bottom. Two pieces of wood were added down the center for reinforcement, connecting all the panels together. The mouth was designed to move by using chicken line attached to a hook on the top and bottom and we also attached this piece of wood using hinges.

Tiny holes were drilled in the panels to attach the chicken wire. We used florist wire. The chicken wire was stretched around the panels tight and wired on. Landscaping fabric is great, its light, durable and can be spray painted. We attached this fabric in folds to give it texture and was left long to shred at the bottom. The material was spray painted dark green and brown. After this step, it was starting to look like a duck.

The teeth need to be made a few days before attaching to ensure they’re dry. I bought a couple bags of light durable clay from an art store. I didn’t have enough clay so I had to come up with something at home. We found some ideas on YouTube, a mixture of 1 cup cornstarch, 1 cup white glue 2 tsp lemon juice, and 2 tsp oil microwave for 15 seconds stir then repeat 3 times. We had to make about 3 batches since there’s so many teeth. Do not over heat this mixture and we added more cornstarch as we mixed to thicken up the goop. Knead this dough and refrigerate for an hr or so. This stuff felt weird but it worked took about 2 days to dry. We made the teeth around wire to attach to separate pieces of wood which were screwed onto the mouth. Brown and white paint was used and blended with a sponge to give it that monster look.

After attaching the teeth insulating foam was used around the teeth to create the gums. It was easy to paint and looked great. This stuff is super sticky and messy but didn’t take long to dry. Halloween spider webs was used for the lips. We twisted it and sprayed this dark brown, then I added moss spray. I added this web material throughout the costume as well. It’s a green textured spray that can be purchased at a flower shop also. A tooth was attached to the upper lip to give it some character.

We collected a variety of sticks and grasses to cover the outside of the monster, but we didn’t want use anything that would fall apart. The best sticks to use would be curly willow, its windy and bendy and best used when its freshly cut. This can be purchased at a flower shop but can get a bit expensive. Everything was wired on and hot glued. Make sure you use gloves; the burns are awful. Raffia and a new mop head that was separated was added to the material in between the sticks. We wired and hot glued this as well. Moss was glued to the upper mouth to hide some wire where the sticks were attached. There was a lot of wire added throughout and took some time cutting all of this and pushing them in to prevent scratching myself or someone walking by. The same landscaping material was used to make a large shirt or poncho with shredded ends and baggy black pants with the raffia and threads wired on. The clothes were also sprayed painted brown and dark green.

The last step was the eyes. Red LED lights were added to hollowed out Styrofoam balls. I used black tissue and glued this to the Styrofoam balls with white glue. Do not use hot glue it will melt the Styrofoam. I ripped the black tissue to give the eyes and different look. It made the costume stand out. The monsters head was heavy but everywhere loved it. I later added some plastic snakes and changed the eyes from red to green. 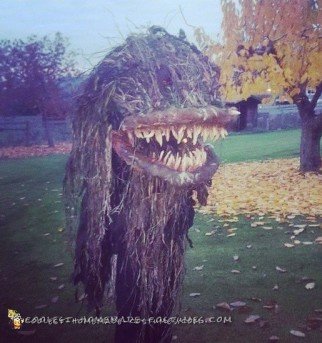 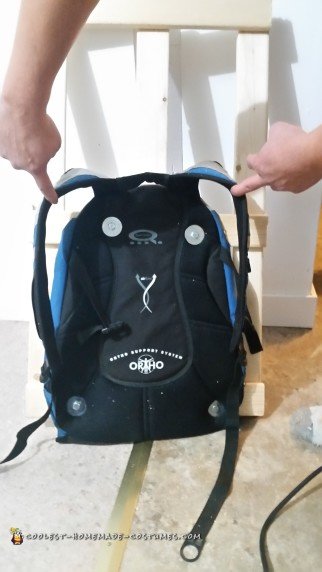 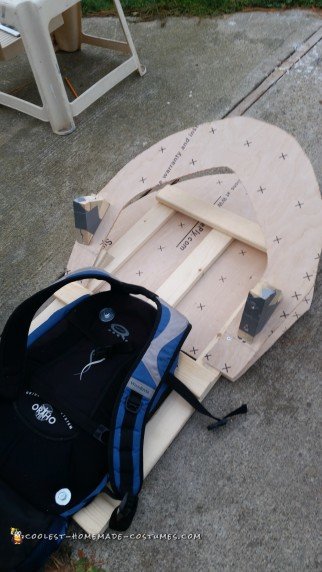 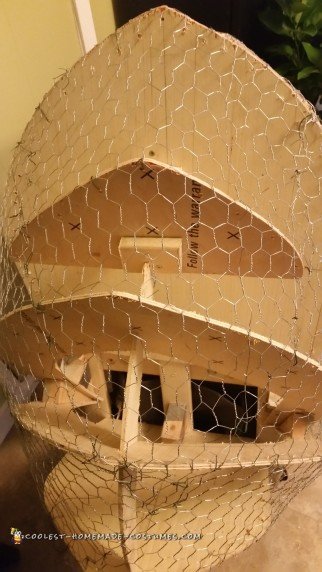 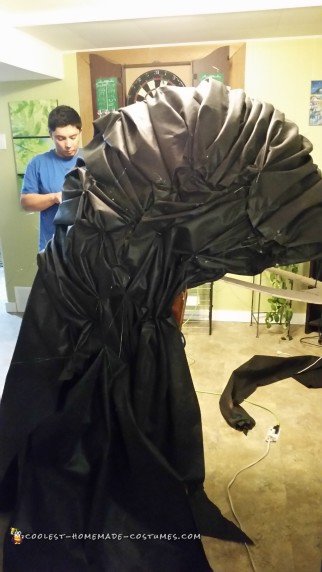 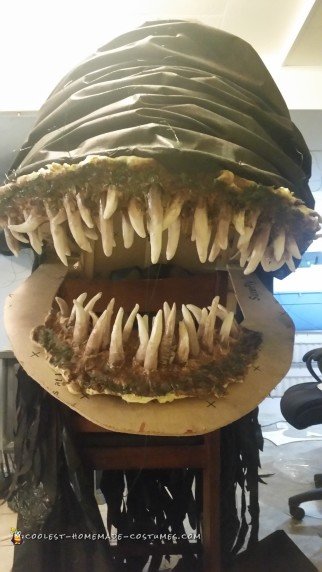 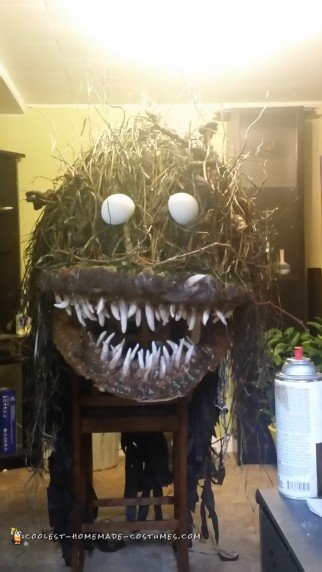 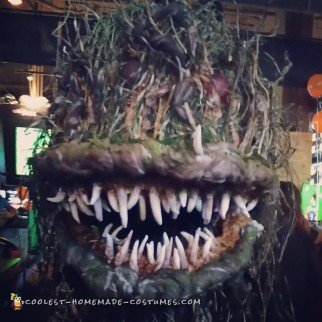 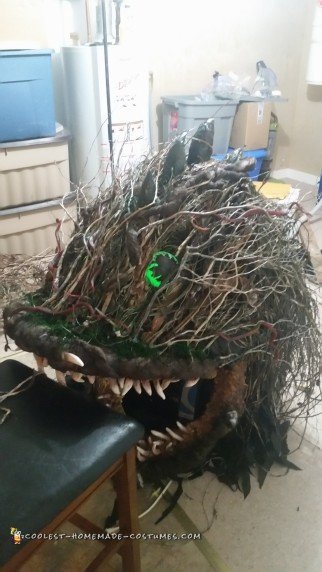