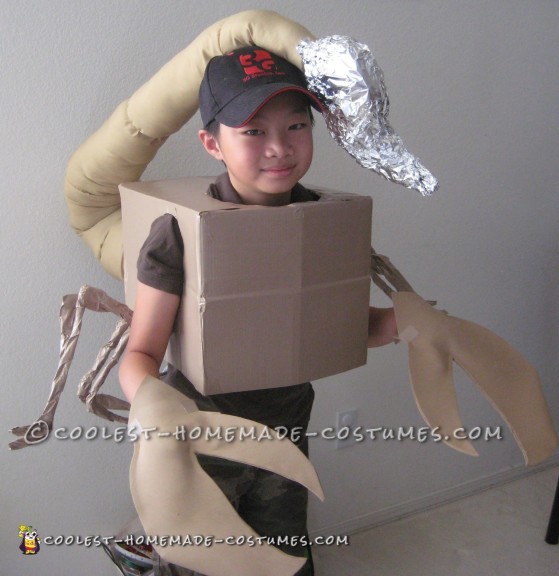 When my son said he needed a scorpion costume to go with his school animal report on scorpions, I thought OMG, why couldn’t he have chosen something easy, like owls.  But his report was almost done, and it was too late to turn back.

So I turned to Google Images; I thought surely someone has made a scorpion costume before.  Out of some 1000 images, 1 was a dog costume, 1 was a store-bought-no-way-I-can-make-that costume, and 1 was a crawling baby with a tail and stinger on his romper.  The other 993 images were all characters from video games/movies that look nothing like the animal.  So almost no help there; I couldn’t believe no one has thought to make a scorpion animal costume and to post it one the web. I need to be creative and come up with something myself all from scratch??!!!

I started with a cardboard box and cut out a hole for the head and the arms.  This would become the body of the scorpion.  Next, I used tan duct tape to cover the outer surface and to make the hole edges less sharp.

For the legs, I took 4 wire coat hangers and cut off the curved hook portions with wire cutters (2 cuts on either side below the twist).  With each cut hanger, I made a broad bend in the middle and folded up the ends like closing up a book (I felt like Wonder Woman bending wire with my bare hands.), which gave me two legs per hanger to thread through the box.  After shaping the legs to look appropriate, I used a hot glue gun to secure the wire portion inside the box and also taped it down with duct tape.  I wound each wire leg with strips of newspaper, then covered that with duct tape, too. Also made sure the tips were not too sharp.

Next came the tail, which I made from cloth fabric, filled with poly-fill.  As my son learned from his report, the tail has five segments, so I tied string around the circumference and stitched it into place four times to form five segments.

For the stinger, I cut two pieces out of flat plastic (found in my recycling stash) for the sides and sandwiched some crumpled newspaper in between them.  I taped it together with (can you guess?) duct tape, then covered it with aluminum foil.  I used hot glue to affix the tail to the body/box (need extra glue here!) , the stinger to the tail, and the stinger to a baseball cap, so that the stinger will go over the top and be in stinging position.

Lastly, I cut tan foam sheets in the shape of claws to make the claw gloves. Voila: a scorpion ready to sting!

My son received lots of attention and accolades.  He entered his school’s fall harvest costume contest, and won second place. 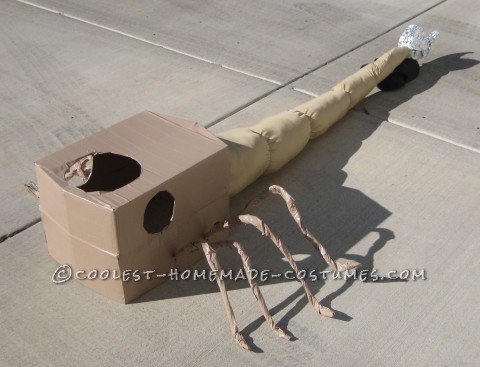 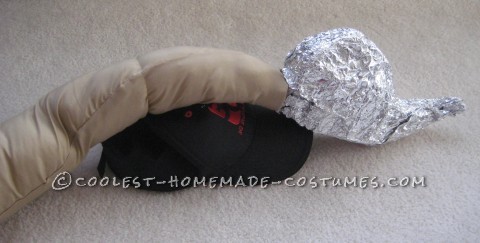 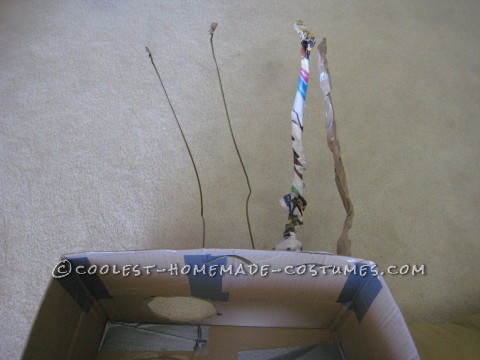 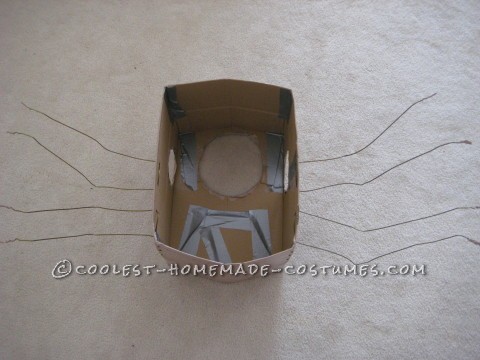 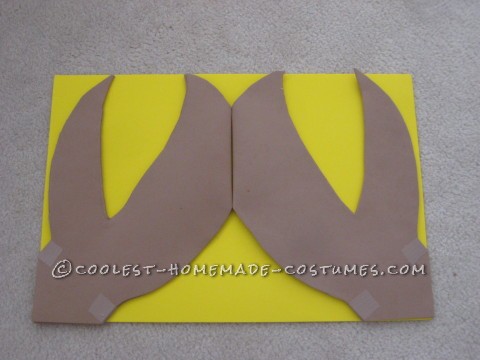