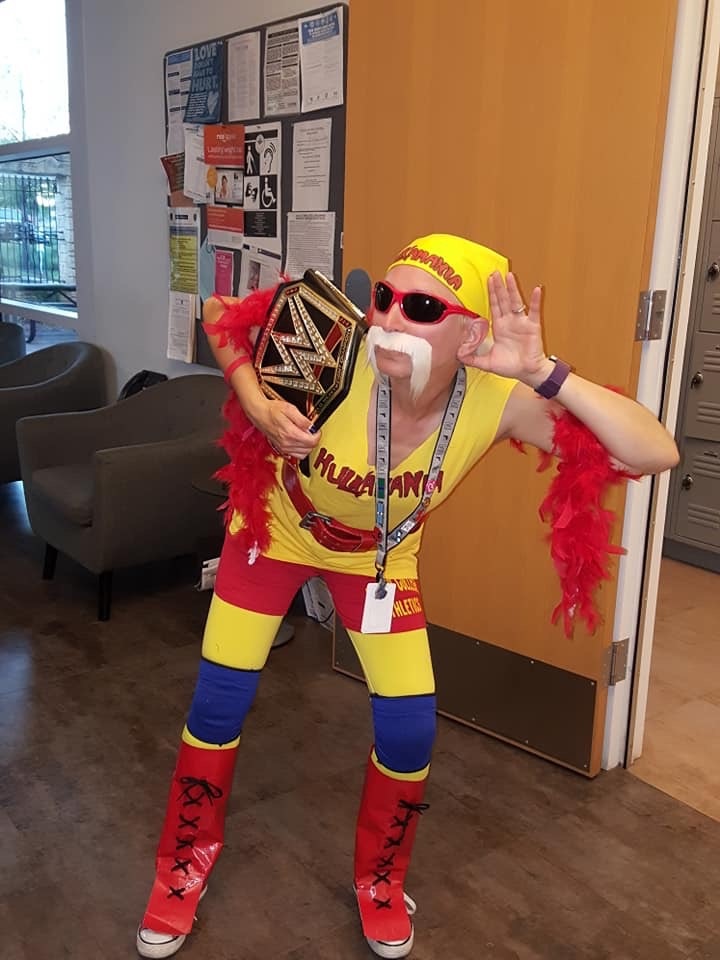 My coworker and I decided to put a spin on ‘sports day’ and went with Hulk Hogan and Macho Man costumes.  I tried to costume on a budget so here goes.

The sunglasses were an online order gift from a friend who know i was putting together this costume, so thanks Caleb, and the bandana was a piece of yellow fabric I had in the house.  I used a red Sharpie to decorate it.  The hair was two pieces of craft fur sewn back to back with a small section cut off the top to use later for the mustache.  A paper mock up was traced and a little spirit gum later I had an epic ‘stache that my coworkers loved.

The red boa was from my costume stash and I bought a yellow t-shirt at the craft store, cut off the sleeves and cut out the neck and a Sharpie again decorated the front. I found some yellow leggings on clearance and dug out the red shorts from my closet.  The knee ‘pads’ (elastic braces)  were a dollar each at the dollar store so yay for cheap finds in that department! Red duct tape and shoelaces with sticky velcro squares to construct the boot covers and the same tape used to cover an old weight belt donated by a friend.

The championship belt was the most expensive thing and i wasn’t even going to worry about it but the hubby insisted the costume would not be as amazing without it so I splurged the online purchase.

I think this was my coworkers’ favorite costume I have ever put together – I think it was the mustache.