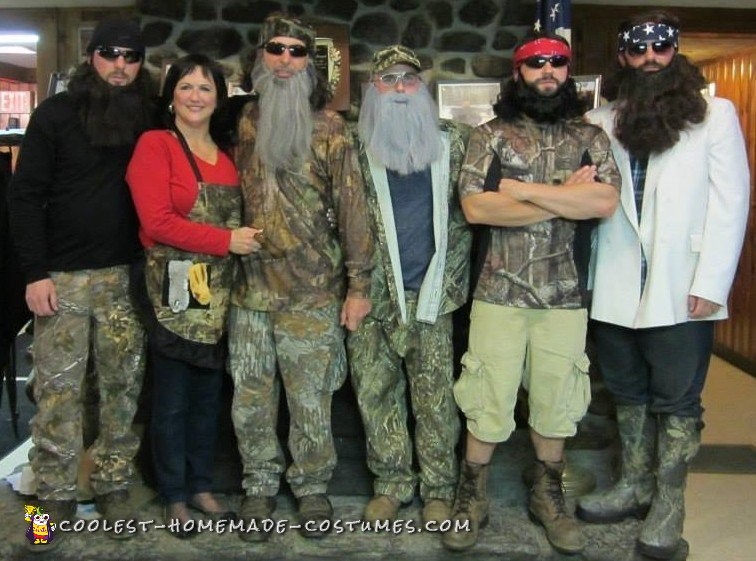 My husband and I have four sons so it was fun to do a Duck Dynasty family costume.

We each picked a character from the show to portray that fit our looks the best. The clothes were pretty easy to find, we are a family of hunters, so we had most of the camo clothes and boots around the house already.

The white suit jacket was bought at a thrift store and the American bandana was bought on ebay. For Miss Kay I wore a black wig, I bought a camo apron on ebay and wore camo flats which I found at Walmart.

I put two dog toys in my apron pocket, one was a squirrel the other one was a raccoon. Any little stuffed wild animal would look good, frogs would work too. The beards and wigs were purchased from Amazon, along with the camo hat with an attached ponytail for Si’s costume.

Some of the guys already had facial hair so it helped blend the beards in. We also had Si carry a blue plastic cup and filled a pillow case with potatoes, to look like a sack filled with frogs. My son that dressed like Willy drew a tattoo on his forearm and his finger just like the ones Willy has.

The hardest part was getting the wigs and beards to look right.  The wigs needed to be trimmed on the top and the sides, but the headbands held down the loose hairs and hid where it was cut and also hid the elastics that go around your ears to hold on the beard.

We had the dj play entrance music when we walked in. He played the Duck Dynasty theme song, “Sharp Dressed Man” by ZZ Top. We got lots of compliments and lots of pictures taken, it felt like the paparazzi was there!

Adorable “I Love Lucy” Homemade Costume for a Toddler!