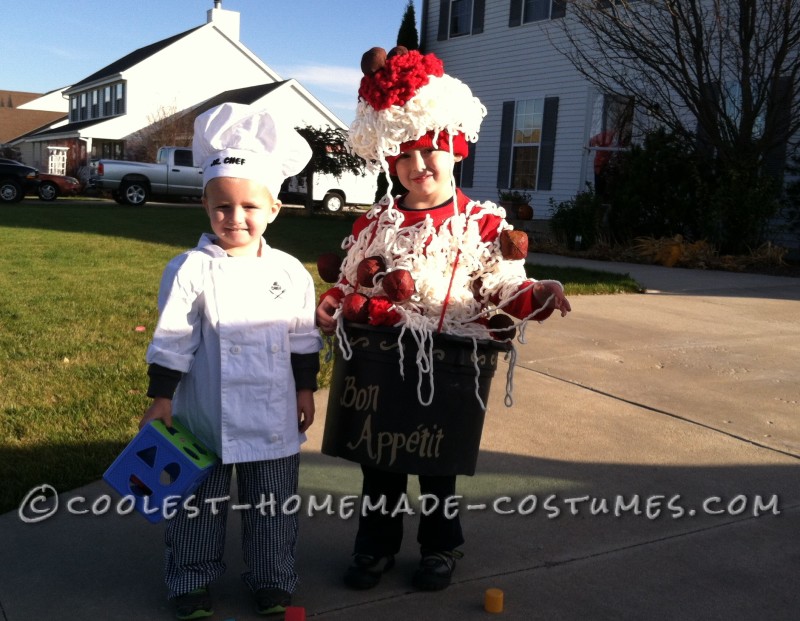 This 2014 Halloween, I thought long and hard on what I could design for my two sons, Ryan (4) and Joshua (3). I knew I wanted a cohesive design to put them in. After many thoughts and ideas denied from Ryan, as I asked him his take on it too, it was decided. A little backround here, my sons are both terribly picky eaters. I have spent many dinner nights cooking things that went untouched. However, my saving grace on the table is always spagetti and meatballs! They both LOVE it and will eat it all. Hmmmm, I thought. What if I could make what I put on the table into a wearable costume? Ryan was in!

So, I went out and bought a cheap red shirt, red and white yarn and brown fabric that was on sale. I sewed each of the seven meatballs and stuffed them with polyester stuffing. I dipped each of the meatballs into brown and red paint we had around the house. The black “bowl”, is a plastic planter that came with a tree we had earlier planted in the yard and was just sitting in the garage. My husband was actually going to throw it out. I painted, “bon appetit”, on the outside; also with paint we had in the house. The spaghetti hat is an old bowl with an old knit hat glued inside. I then used spray glue to adhere the meatballs and yarn to the shirt, plastic bowl and hat. My husband glued foam to the inside of the plastic bowl, just enough so Ryan could fit inside and be comfortable. The entire costume cost me about $10.00! I then bought a used Chef costume for Joshua to wear from online. The end result, spaghetti and meatballs with the chef! :)

Then, the day of trick or treating arrived! Ryan was patient as I did some last minute “tweeking” to the costume as he waited for the clock to stike 6:00pm to go trick or treating. The result  turned out spectacular. SO many people complimented me on it and how cute Ryan looked. At least 15 people asked if they could take pictures with their phones to show people. Random Moms came up to me and admired the homemade costume and asked how I did it. I openly gave them the tips- especially using the spray glue. I don’t know how I could have done it so well without that! Our street was filled with store bought costumes- although each young child looked adorable- the originality behind Ryan’s took the prize. Numerous people commented on that this was the BEST costume they had seen in years! I was proud that I had given my son something he could be proud of and dang! Did he look cute!! :)

The hardest part of the design was placing the yarn “just so” on the shirt and the bowl so it looked natural. However, I loved every minute of it. The smile on Ryan’s face when he saw himself in the mirror was priceless.

Should we win the prize with this costume, I will put the money into Ryan’s college fund. Can NOT go wrong with that I figure! :)

Thank you for reading my story and the consideration for the win. Happy Halloween!