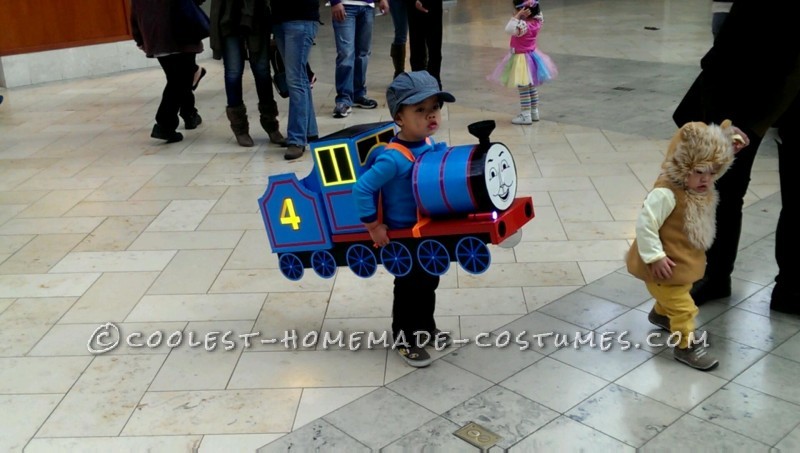 My son just turned three and is train obsessed. We live in Boston and a block from South Station. He loves to visit the station to watch the trains and wave to the engineers. When asked what he wanted to be for Halloween he wanted to be “Gordon the big strong engine” not a simple Thomas or Percy. So research began online to figure out the details to put into his costume by going online.

We put together a bunch of household items to makeup the components of the train. We used a bucket for the head of the train, boxes for the engineers compartment and tender, the top half of a water bottle  for the smoke stack, a bottle cap for the bump on the train (not sure what it is or called), CDs that should have been thrown away a long time ago for the wheels. We built a frame out of wood using as little material as possible to keep the weight down.

We painted each component separately which was a thrill for my son since he didn’t have to worry about painting over any lines. I made the spokes of wheels using blue tape so the lines would be clean. Red tape was used to stripe the body of the train. The tape makes the work so much easier since it can be lifted and replaced if you don’t get it right the first time.

Everything is then put together using wood screws. To create the windows and numbers I decided to use reflective tape for safety at night. It is the same material used on street signs and I got it fairly cheap on eBay. Straps are used to create suspenders for the costume can be worn. The final touch is a mini flashlight ziptied to the train.

My son loved the train. When trick or treating he decided back his train up for the candy to be put in the coal tender. 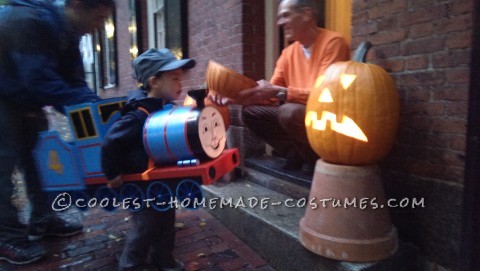 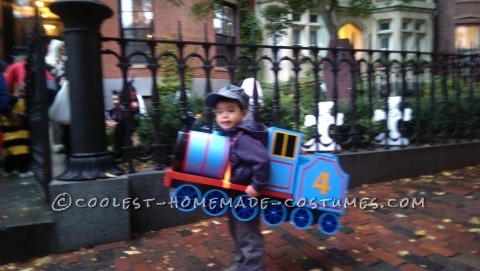