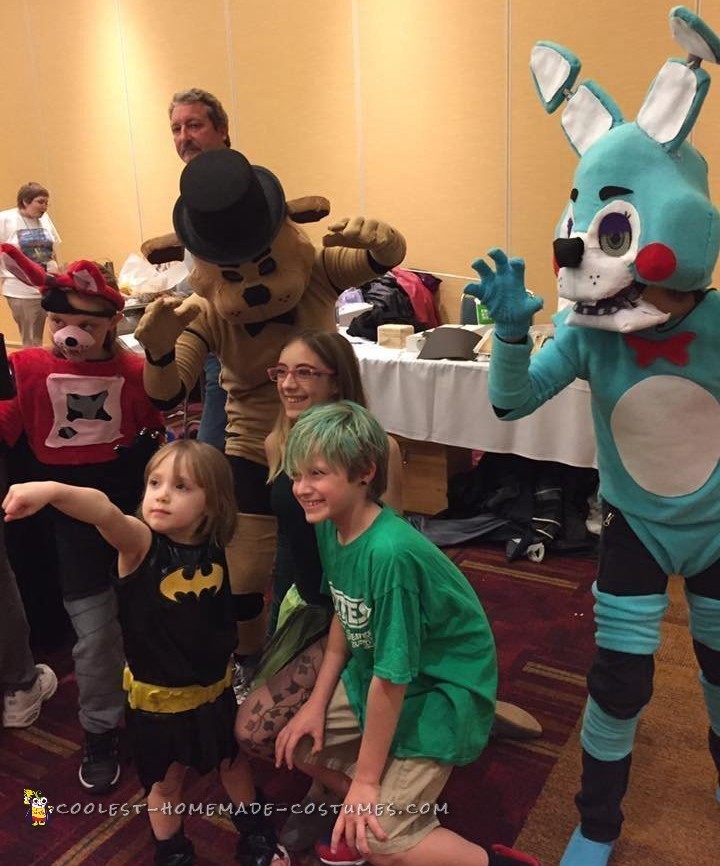 Well, me Freddy Fazbear, my cousin Toy Bonnie and my sis Foxy love the Five Nights at Freddy’s videos games so we thought it’d be awesome to go as them in a group for Halloween. The only problem wast that we had very little money so my cousin printed out some reference sheets and my sis paid for the felt while I gathered all the things around the house I could use.

My head was made using a car sponge, a flower pot, a squeaker out of a dog toy for the nose, cushion foam and card board for the ears. I also used wall mesh with black panty hose for the eyes that I colored in with a crayon, while sowing the leftover felt to random black clothes.

The bunny was done almost exactly the same except his head was made out of leftover couch foam and skewers for the ears. Everything on both heads is held on with hot glue and since my sis didn’t want to wear a mask, I made her a cute little nose out of an old fox costume. I had an eye patch made out of foam felt and elastic and ears I molded over a pair of white rabbit ears. The hook was made out of a cup and a clothe’s hanger wrapped in tin foil. The metal glove was a normal skeleton glove with little pieces of tin foil hot glued to it.

I made all three costumes in a week since we also wanted to wear them to the Indiana comic con which was great. Everybody loved the costumes and now we can finally wear them for Halloween. It was hard but worth it to make since they both loved their costumes and treated them like gold.