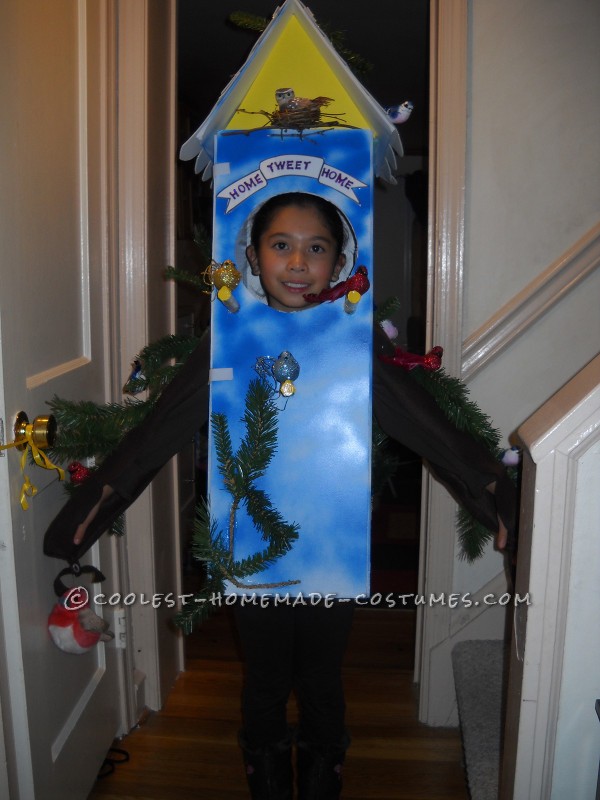 “I want to be something that no one else will be…”  my daughter’s request every Halloween.  She loves nature and being outside.  She prefers to be “things” rather than people.  We like to go to crafts stores and just walk up and down the aisles marveling at creativity and always, do-it-yourself ideas.  There were some unpainted wooden birdhouses on the shelf.  We have painted these for the elderly in nursing homes on Martin Luther King service day at school, as well as painting them for Grandma who collects bird houses.

“We have to remember our friends in the winter…”  What a good way to send out this message by being a birdhouse for Halloween.  And, not with fall foliage but with evergreens.  Researching birds that were common in the winter, cardinals and blue jays, I ordered some artificial ones and some evergreen branches from a floral on-line company. On paper, I sketched a tall bird house with her face as the circular opening with free arms emerging from the house covered with branches (limbs) and brown legs (trunk)  being able to walk freely.  She would wear a brown sweat shirt and brown sweat pants with brown boots.  Unencumbered arms and legs are two musts for an 8 year old’s costume to be worn for parading, walking around and trick or treating!

I chose foam board for the house since it was sturdy and easy to cut with an exacto knife.   I .measured her across her chest from arm to arm and it just happened to be one half the 20 inch  width of the foam board..  The length of the board was perfect too  30 inches which was the measurement from the mid thighs to a few inches above her head.  I scored 2 foam boards down the middle to make 4 sides of the house.  I reinforced 3 of the inside edges with duct tape and put 2 velcro closures on outside of the 4th edge on her right side so she could take the costume off and on herself.

I cut out the circular opening for her face by tracing a salad plate on the foam board, and cut symmetrical arm holes on the two sides of the house.   I took a 3rd piece of foam board and scored it down the center for the roof,

We spray painted the house to be my daughter’s desired color – blue.  As we started to spray paint, she liked the tie dyed effect of the blue on white and so we left it that way.  We made shingles out of silver glittery foam and glued those on.  We used dowels that went through the front and back of the house at her shoulder level — to keep the costume up on her shoulders and to make 2 perches for birds.  A short third dowel was glued to make a third perch.

Brianna’s favorite part was making the ribbon shaped foam sign Home Tweet Home.  She kept tweeting and not with a phone!

Decorating was the most fun part for me…. gluing strategic branches and placing the birds. It was really coming alive!   I made her two brown fleece evergreen covered half (circumference) sleeves and glued them to the top inside of her arm holes.   She carried one of those stuffed little birds with authentic bird sounds.

She loved it, and so did everyone else.  Moms and teachers came up to me and marveled at the detail and the creativity.  When she went trick or treating, Brianna was given extra candy several times because folks thought it was the best costume they had seen.  People even stopped handing out candy to take photos of her or called their spouses down to get a look at what came to the door.

I did get a comment from one mom about my having too much time on my hands.  I would never judge another person on how she/he spends her/his time.  But what I know for sure is a saying that I once read when my children were babies…. “Let me do my best for them, they are only little for so long.”   For as long as she wants to have a special and unique costume, we’ll work on it together.  It’s a nice time we spend together making it and I don’t mind staying up in the wee hours of the night to get it done.  I know I have done my best for her… and she was grinning from ear to ear…. perch to perch… bird to bird. 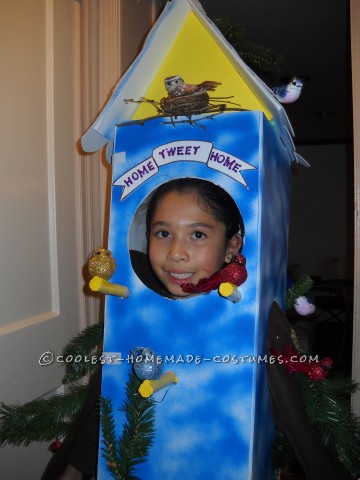 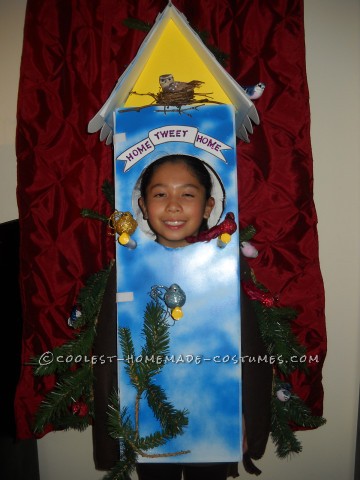 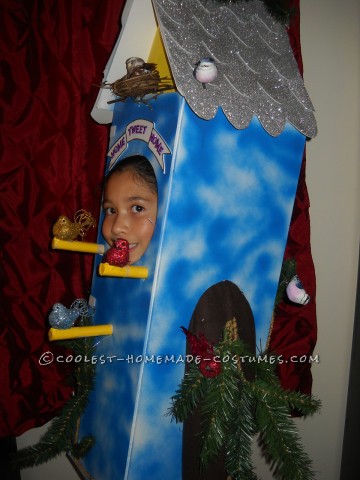 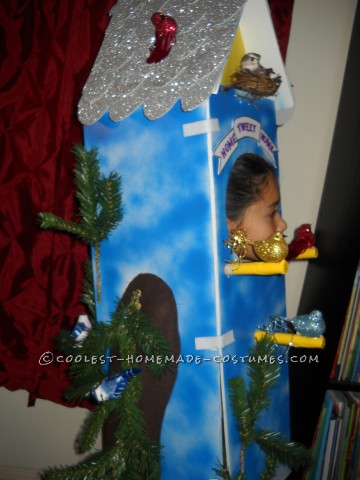