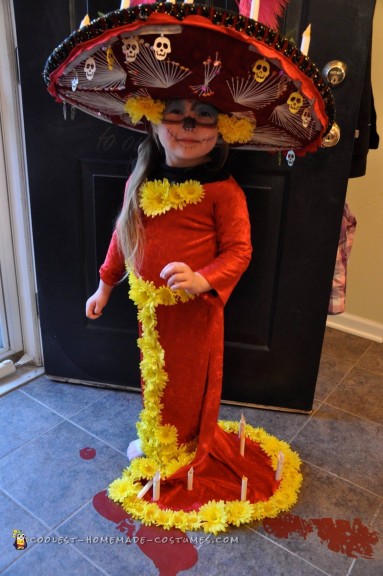 My daughter had to be La Muerte from the movie Book of Life for Halloween. I started by buying a red velvet fabric and sewing the long dress. I made sure that it had a rounded train just like the “real” La Muerte. Then I bought a red sombrero from the local thrift store which was just an absolutely perfect find.

The biggest challenge was all the “candles” that go all around the hat and on the train of the dress. Believe it or not, after brainstorming for a couple days, I bought a box of those cheap cardboard applicator tampons (yes tampons!). They made the absolutely perfect candles and were light enough to hot glue on. So after I got caught by my teenager sitting in front of the TV taking apart tampons and explaining myself. I cut some “flames” from yellow and orange tissue paper and glued those to the top of each candle. I then took each candle and hot glued them all around the hat and the train of the dress.

I found some yellow carnations and a palm frond at the craft store and glued those along with the small skull on the top front of the sombrero. I also found some skull garland to glue around the bottom of the hat so they hung off like La Muerte’s hat. I glued yellow daisies on the dress as LaMuerte’s dress has. I found the face painting at the Halloween store which were just temporary face tattoos for Day of the Dead Costumes.

People loved the costume, although admittingly I guess it may not be as popular of a movie as I thought. The train of the dress flowed and followed her so beautifully on the floor, and I was just amazed how well the “candles” stood. The most expensive thing about the costume was the fabric and the tampons. The whole costume cost me about $15 to make! 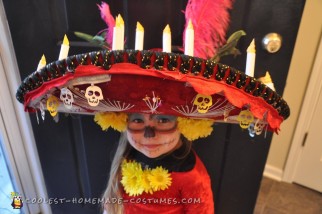