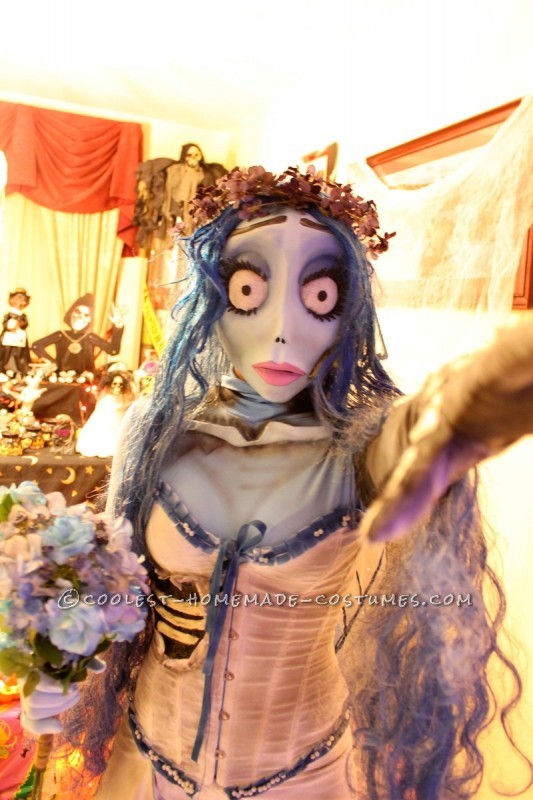 These Tim Burton’s Corpse Bride Costumes are both handmade costumes inspired by the characters from the movie Corpse Bride, directed by Tim Burton. For those who are interested, I have explained the process how they were made in the following steps. I hope you enjoy!

Challenges I Faced: This was my first time airbrushing and my airbrush broke in the middle of painting Emily. I had to disassemble the airbrush every 3 minutes for a deep clean in order to just paint smoothly. It tested my patience. Another HUGE challenge was working on the costume while moving. We closed on a house and while packing everything, I had to finish the costume. There were many sleepless nights and times where I would have to go through boxes just to find super glue.

Best Part: I am truly proud of everything. I didn’t think that I would be able to make this costume, not to mention the props like the worm and Scraps, the dog. I am sooo happy that I decided to attempt it and push through.

Costume Experience: All of these skills were self-taught through watching YouTube and reading forums. After going to my first Halloween block party in 2008, I decided to give it a try and in 2009 I made Edward Scissorhands, which is when realized I had a skill after seeing the massive lines of people waiting just to take a picture with me. 2010 was Jack Skellington and 2011 was The Mask. You can see these costumes on instagram @DaleonChase if interested.

Reactions Received: The reaction received was unbelievable. We went to several Halloween events and each and every time we would have lines of people just waiting to take pictures with us. It was truly amazing! Seeing everyone’s reaction to the costume is my favorite part, especially the kids!

Tip to share: Please use safety precautions. Costuming requires you to deal with a various amount of chemicals and the worst thing to do is damage your eyes, hands, and lungs etc, because you can’t costume WITHOUT THEM! I learned the hard way when a piece of fiberglass got in my eye. Also, you must believe in yourself and don’t worry about the criticism from others. Push through to the end no matter what!

I hope you all enjoyed the costume pictures.

I made a lifecast of myself and girlfriend with alginate and plaster bandages. The final cast was done in urethane foam. Using the same process, I also made a copy of my girlfriend’s arm and leg, which was used to make the bones shown on Emily.

WED clay (Walter Elias Disney Clay) was used to sculpt Victor and Emily on our foam life casts. It’s a great water-based clay that does not dry out as quickly. This ensured a perfect fit for the masks.

The masks were covered in crystal clear matte finish to seal the sculpture and prep for molding.

A mold of the sculpture was taken using a brush on silicone rubber and a plastic resin to support it. When demolding, the clay is thrown out and the mold is prepped for the final casting.

Both full head masks were cut in half and mini magnets were epoxied on the inside to hold them together when wearing it.

Eye holes were cut out and replaced with Buckram fabric. Both masks were then airbrushed and minor details added.

Suit: Painted jacket and vest. Spandex gloves were sown to show elongated fingers. Tie was made in latex to make it look more cartoon-like.

Dress: A bed sheet was sowed to a corset. I added latex ribs, pearls, rubber swirls (latex + blue acrylic paint drawn on with a squeeze bottle). I then airbrushed the dress and used an aqua blue leotard underneath it.

Veil: I attached flowers and rubber swirls to fabric then cut out the pattern and airbrushed dark blue shadows. Flower crown was made and zip tied to the rubber part of the veil.

Worm, Tie, and Bones: The worm, tie, ribs, arm bones, collar bones, and leg bones were sculpted in Chavant NSP medium clay and molded with plaster to make latex castings. The raw rubber pieces were then airbrushed and covered in glow in the dark paint.

Butterfly: I made the butterfly out of a piece of plastic Milk carton then airbrushed it.

Dog: Each bone was sculpted using regular Mexico white water-based clay, I then molded it in silicone and resin castings were made. The bones were fed through a wire and glued with liquid nail. It was then airbrushed and made glow in the dark.