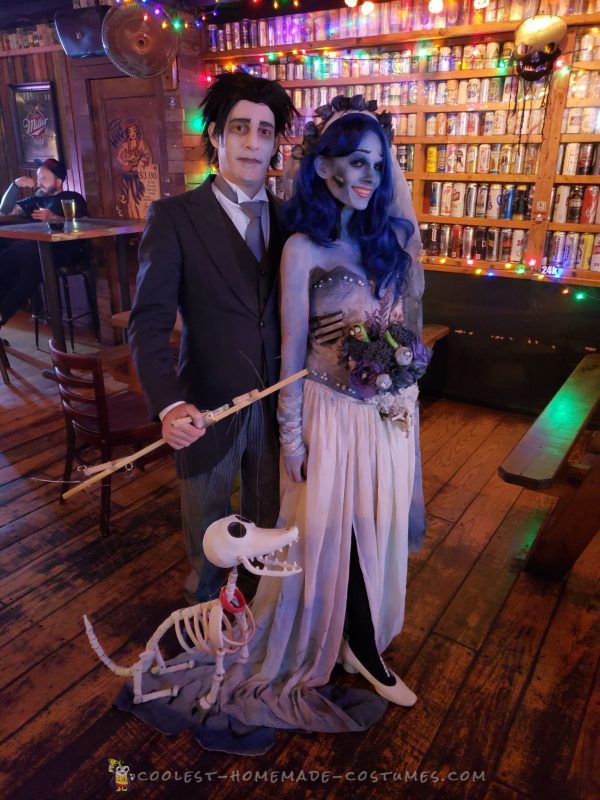 My partner and I love Halloween; it is the time of the year that celebrates creativity, whimsy, and lets you unleash your inner child.

Creative costumes bring people together – two people who would never have otherwise met can become fast friends at Halloween.

In our everyday lives we captain and crew an 80’ private yacht so our day-to-day is fun, but practical: fix this, cook/clean that, check the weather and charts to sail away. But Halloween allows our imaginations to take control.

This year we wracked our brains on what we would be.  When we watched Tim Burton’s claymation the Corpse Bride, a lightbulb went off in my partner’s head – we would go as the Corpse Bride, Victor, and he would build a marionette skeleton dog! But how to go from an idea to reality?

For Emily’s costume we bought a plain corset and a maternity bridal dress, the only one we could find with a slit all the way up the skirt.  For the veil we got some sheer fabric.  We tea-dyed everything in black tea for an aged look, then glued 3 layers of lace to cover it and cut the top off of the dress off to make it a skirt.  After that we painted blue swirls on the veil and bottom of the skirt and carefully sprayed blue, black, and white fabric paint on the skirt, veil, and corset, darker at the edges, lightening towards the middle. Next we glued fake pearls and little skulls around the top and bottom of the corset, and burned holes in the skirt and veil.  Finally we ripped a hole in the lace at the side of the corset, painted it black, and afixed three ribs made from Sculpey oven bake clay.

For the bouquet, we bought fake flowers and lightly spray-painted them black, glued little skulls to the center of the flowers, and wired in Emily’s maggot friend from the movie we had made from Sculpey.  For her skeleton arm we ordered one online and taped and wired it to my left shoulder, wired it to hold the bouquet, and wired that to the front of the corset.  We also put gold toe-ring on the left ring finger for the wedding ring.

For makeup, we used Mehron light blue and black for the base, the ELF earth and ocean eyeshadow palette for the shading, pink lipstick and liner, and false lashes.

For Victor’s costume we bought a used tux suit with tails and a pinstriped pants and a red vest.  We used a white shirt and black shoes we already had.  We used old white powder makeup he had from last year and eyeshadow to ring his eyes and put on his lips to make them look darker.

Scraps, the skeleton dog, was the real challenge.  My partner studied pictures of the movie and marionettes online.  Then he formed each bone, vertebra, rib cage, leg bone, and molded white Sculpey around wire, and baked them.  First came the spine and ribcage, then the legs, and finally the head, which was sculpted clay around balled tin foil. He ran fishing line and bendable wire through loops to tie everything together and fasten it to the wooden control.  Scraps could open and close his jaw, wag his tail, lift each leg and dance!

When we went out Scraps was constantly moving… the dog sure loves to dance.  Everyone who saw us smiled, came up and complimented us.  People asked who did my makeup (me), were amazed that we had built Scraps and made everything ourselves, and took thousands of photos with us.  Young children were a little nervous of the skeleton dog, but he won them over with dancing and antics.  Even a dog came over to touch noses with Scraps!  The costumes brightened people’s night, and maybe even year a little.

Thank you for taking the time and consideration to look at our costumes.