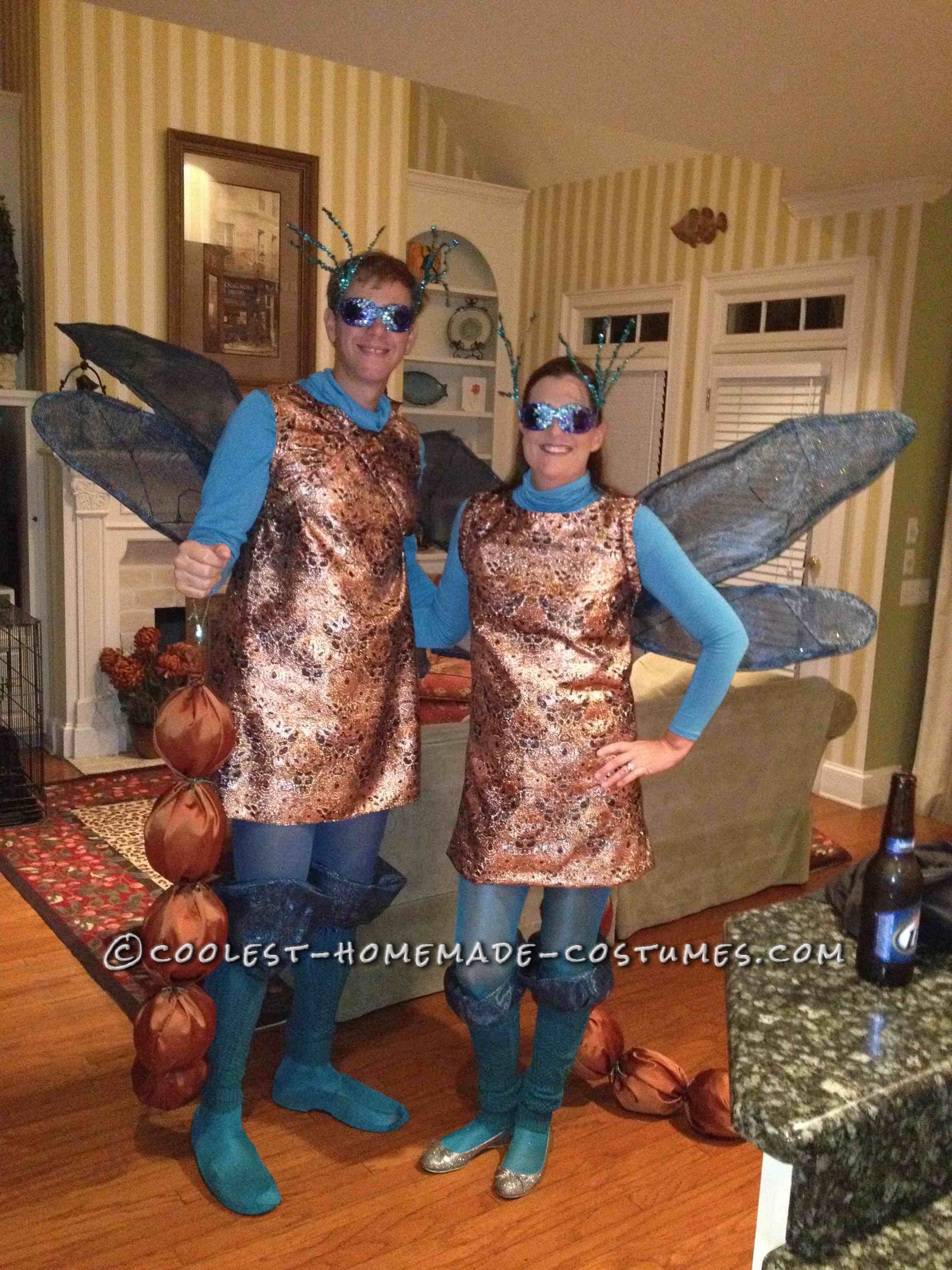 I think this Dragonfly couple Halloween costume was my most difficult project to date, but it turned out beautifully. This year, my daughter said she wanted to be a dragon fly and we were returning to the Halloween party, and so I thought “why not?”

I’ll start with the easiest part:

The body:  I bought blue tights to go with the blue shimmery fabric I used to make the wings.  I bought us all turtlenecks in the same color at Gap, Target, or Old Navy…that was the end of the easy part.

The Tail:  I made 30 paper mache balls out of balloons first and had them dry for about a week before I popped the balloons..  This made sure that the tail piece was light and that the balls were the exact size I needed for my tail.  I then made long tubes of brown “silk” fabric about 12-18 inches wide and sewed up the bottom of the “tube”.  I then tied some ribbon after each ball to secure the ball inside the fabric tube.  Once I had my tail long enough to work with the proportion of each person, I sewed up the end of the “tube”.  I tied a piece of the ribbon on the end of the tail so that we could hold the tail around our wrist and not have it drag on the floor.

The wings:  I used wire hangers and attached them to each other and made a “circle”.  I then pulled them length wise to make them into “wings”.  I made four wings for each person.  This also took A LONG TIME…since I was making three costumes.  So that they wouldn’t crush inside, I secured them by using additional wire hangers inside of the ovals.  I then wrapped all of the wire hangers with green garden tape and also secured them together with duct tape so that they wouldn’t collapse.

I cut blue gauzy fabric and made cases to cover the wings.  I then hand sewed them where they attached to each other so that the back of the wings looked “finished”.  I then made suspender straps to wear the wings and attached the tail to the back side/bottom of the wings using several safety pins.

For the dress I used fabric that was aerodecent and shimmered (I made the suspender straps out of this as well so that it blended into the outfit.  My husband’s was also a dress, and I used a very basic A-line pattern with a zipper.  My daughter I used a halter style “two piece of fabric” pattern that we could tie closed.

The legs I used matching blue legwarmers and then cuffed them with the wing fabric and elastic to make “boots”.  I used another pair of tights to cover up our shoes.

I made eyes with funky glitter and our antennae were floral decorations from Michael’s. 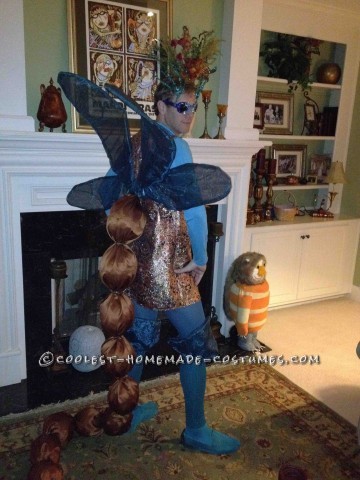 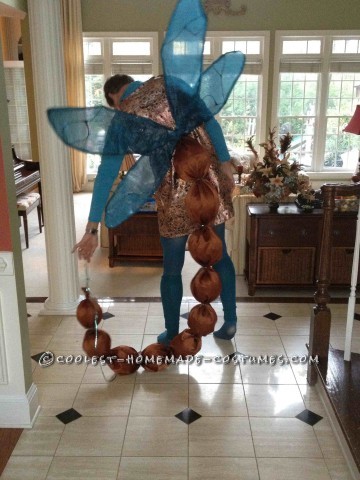 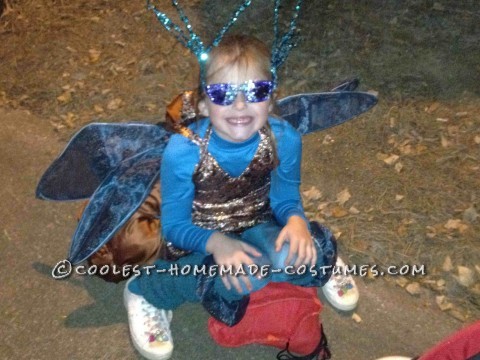 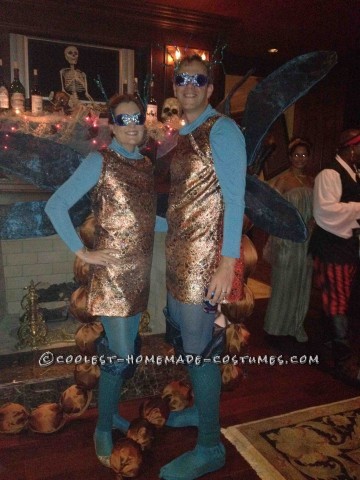 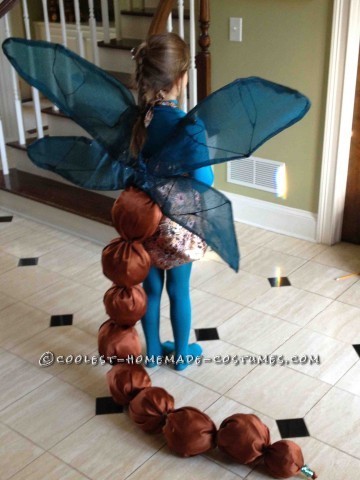 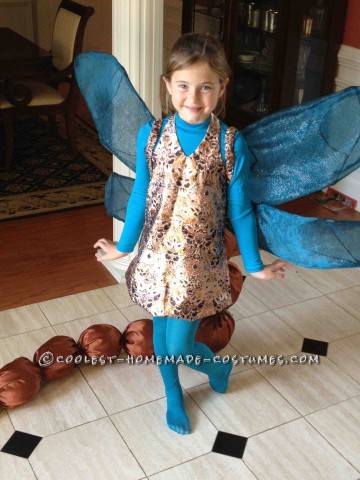 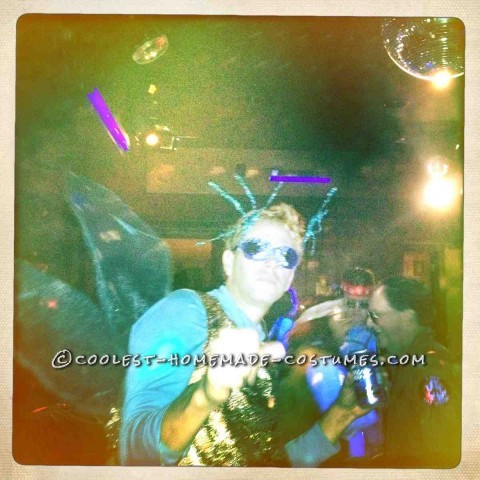 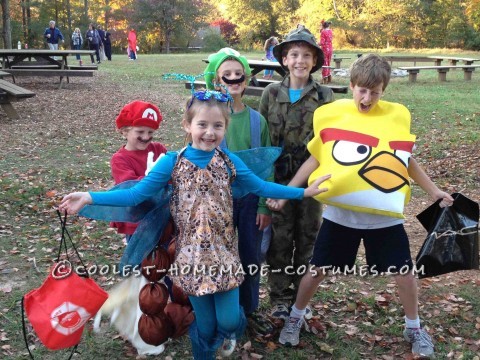