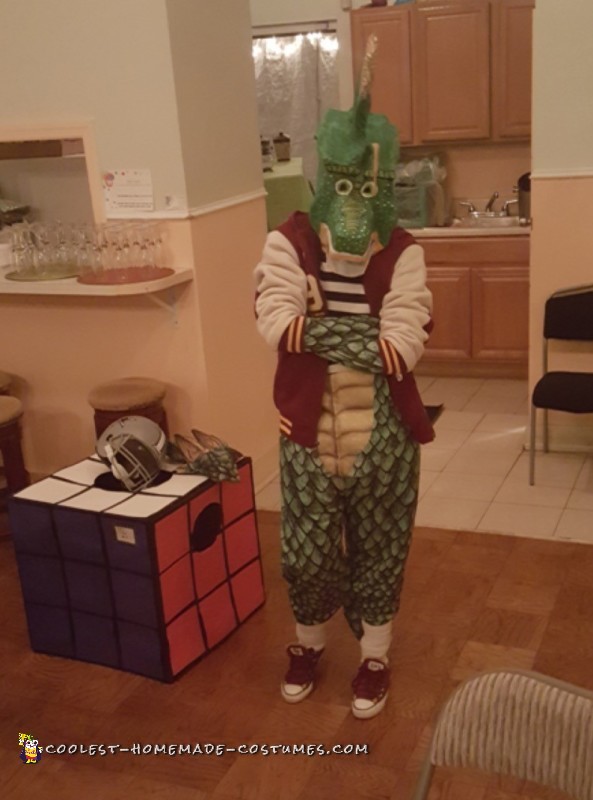 For my 29th birthday I wanted to take it back to my childhood era of TV watching, game playing, music loving fun times. I decided I would throw a 90’s “What was hot” Party! After trying to gather material to transform into Diva Plavalagona from “The 5th Element,” I became worried that I would be the only one at the party without a character costume.

Soon I began thinking about the shows I used to love and immediately ” The Dinosaurs,” caught my attention! I began to make the structure of my head piece out of an old glad garbage bag box holder and masking tape to hold it firmly in place. After I used blue shop paper towel to construct the paper mache covering, I allowed it to dry for 48 hours. Then came the issue of trying to paint the perfect face to get the feel of Robbie the dinosaur.

After an entire weekend the head piece was finally complete, but the problem of finding a bodysuit that would give the shape of the dinosaur  well as fit my budget was a very hard task. The anxiety almost consumed me but I ended up finding a “Land of the Lost” Sleekstak costume to finish up the project I had began. So now I thought I was home free, but I was mistaken, I needed a varsity jacket! It seemed like all of my corners were being blocked, but as my mom was walking past a thrift store she saw the jacket in the window.

My budget had been chewed apart and the only thing standing between us was $13 bucks. I looked under every couch in my house and in all of my pants pockets and finally scraped up the money to get the jacket! After all of that work and not giving up, my costume became legendary and my party was a true success!