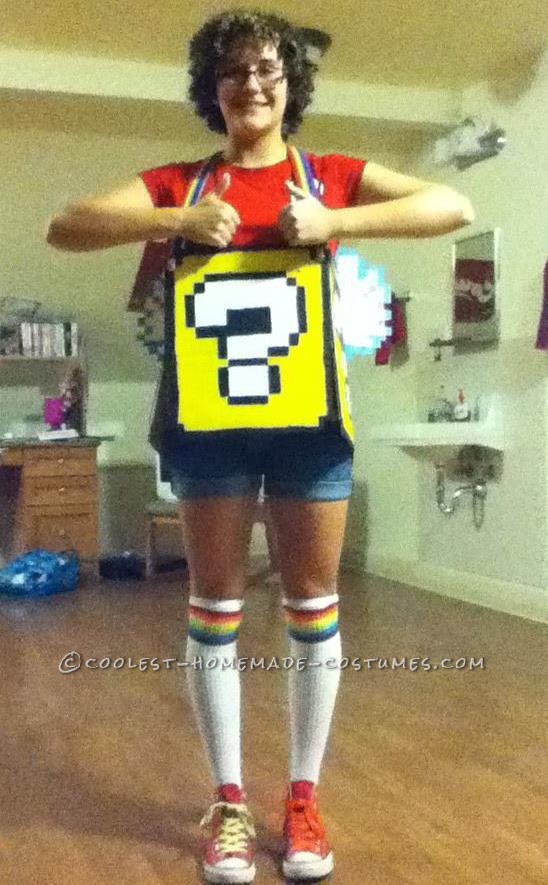 I wasn’t really sure what I wanted to dress up as for Halloween. I really wanted it to be Mario related, specifically from old-fashioned super Nintendo games because those are my all-time favorite! I didn’t have the money to afford a great, detailed costume, so I looked around my dorm room for ideas. Then, I saw a small box that was my roommates and got the idea of being the question mark block from the Mario games!

I went down the hall and borrowed paint from my friend. Then, I looked at a picture of a question mark box that I found online and tried to paint the block just how it appeared in the picture. After painting the box, I felt that it needed more. Then, I remembered that some of the blocks in the games had wings and I thought it would be an adorable touch! I then found a picture of how the wings were colored and how they were attached to the block. I then cut the wings out of cardboard from a cereal box that I had, and I painted them accordingly.

Attaching the wings was tricky at first because I wasn’t sure how to do it to make it look like the picture. After thinking for a while, I finally decided to cut slits on the sides of the box and stick the wings in. It worked perfectly! I just needed to put tape on the insides to keep them from falling. After working on this project for a few days, it was finally finished and it looked awesome! I paired it with one of my Mario shirts that has a mushroom in the corner, some shorts, red converse, and rainbow socks and suspenders. The outfit came together very nicely and I am very glad I was able to get my creative juices flowing! 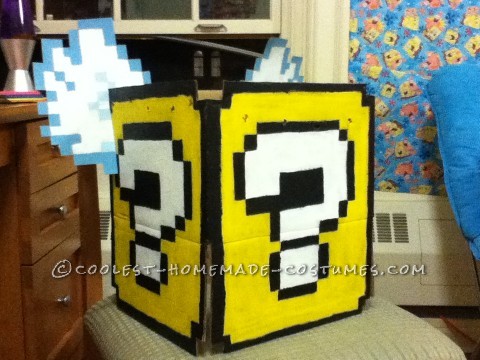