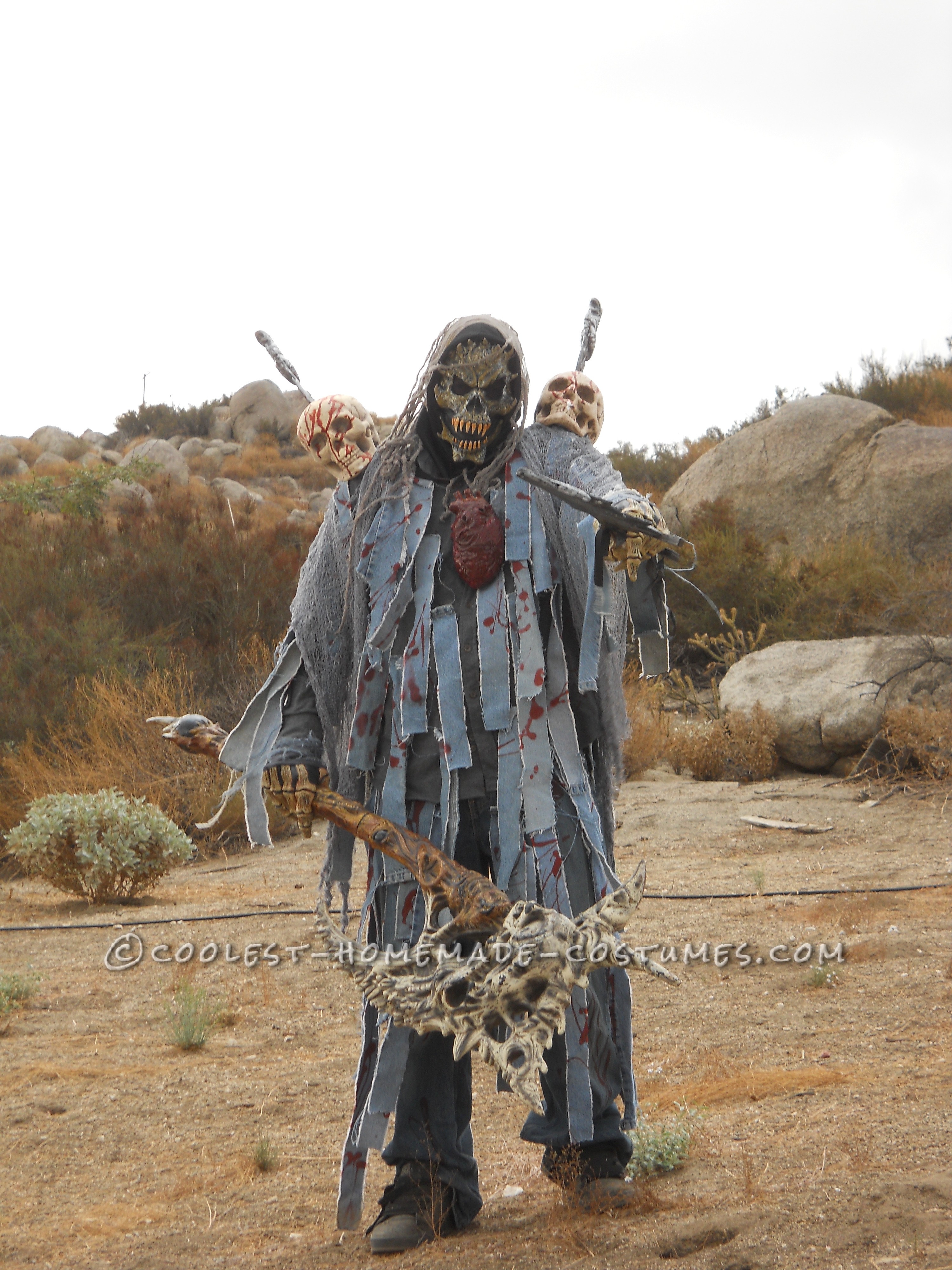 I wanted a scary demon/zombie costume for my first year back from the army. I went to the Halloween store and tried on a $70 zombie costume. The costume ripped just from putting it on and the “scary” parts were cheap plastic. The material was a joke for something costing so much. So that day I was determined to make something of my own. I went to Walmart and bought a clearance flannel button up, some skulls, daggers, and fx blood. I shredded 2 pairs of jeans into strips and hot glued them randomly on the shirt and on another pair of jeans.

I wanted to go for a simple look that would be like a Jason stalker type. I’m 5’8″ so I wanted something to give me a little more size. I found a cheap pair of used hockey shoulder pads. I took the shoulders off and glued them inside the flannel shirt. This gave the shoulders a platform and some bulk. I glued the skulls on the shoulders and added the daggers. FX blood was used to give it a little more depth and distract from the fake look of the skulls. I wanted it too look like they were “trophies” from a kill.

The mask is what makes the costume. It’s a simple demon skull mask, but more importantly it has a black hood and grey dressing that can partial cover the face. The mask also allows me to breath and move unhindered. Blood was added to the torn jean strips. I found a pair of bone gloves that add an extra inch to my fingers. I really lucked out because these gloves allow me to still use my hands to grab things but are creepy when I wave at people. The axe and cleaver give the costume its fear. The axe is hard plastic and is about 6 feet in length. It’s light so I can swing and carry it but has size that draw attention. The cleaver is a good weapon alone but makes an awesome secondary weapon just being held of dangling from my belt.

I really didnt think my costume was anything overly scary, but I’ve watched numerous fx artists who state that simple is scary. Make people use their mind against them. And I think that is what people love about my costume. Between the skulls on the shoulders, a great skull mask, ragged bloody rags danging, and a giant skull battle axe. Its hard for people to focus and realize the costume is fake. Blood and gore can be creepy, but its about instant shock value. My costume keeps you guessing. I can move slow as a stalker, but then im able to sprint full speed. So when someone sees me they are still trying to take everything in and I can explode, close the distance and they don’t have enough time to think. That is what scares are about.

I have had this costume for 5 years now. I’ve only added small details such as black spray paint on the jeans to give more darkness. Total black can be predictable, so using dark greys and blue jeans with just a hint of black give it more life.

The best way is how I can scare. I use the costume in two ways, I can stand or kneel perfectly still and wait for someone to get close. I have had countless people swear I was a prop and walk right past me. Some even going as far to get eye to eye with me. This is the biggest accomplishment to me, looking like a living prop. The other way is simply walking around and having people see me from a distance. They cant quite tell what I am, then when i close the distance they usually freak out because they scared themselves from thinking too much.

The best feeling is having parents ask me for my picture with kids. To me the costume isnt anything professional but im proud how it turned out for something on a small budget.

Total cost of the costume was under $60 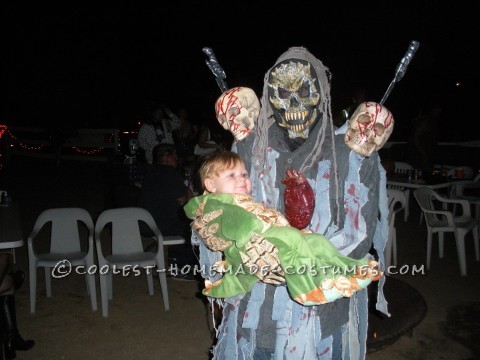