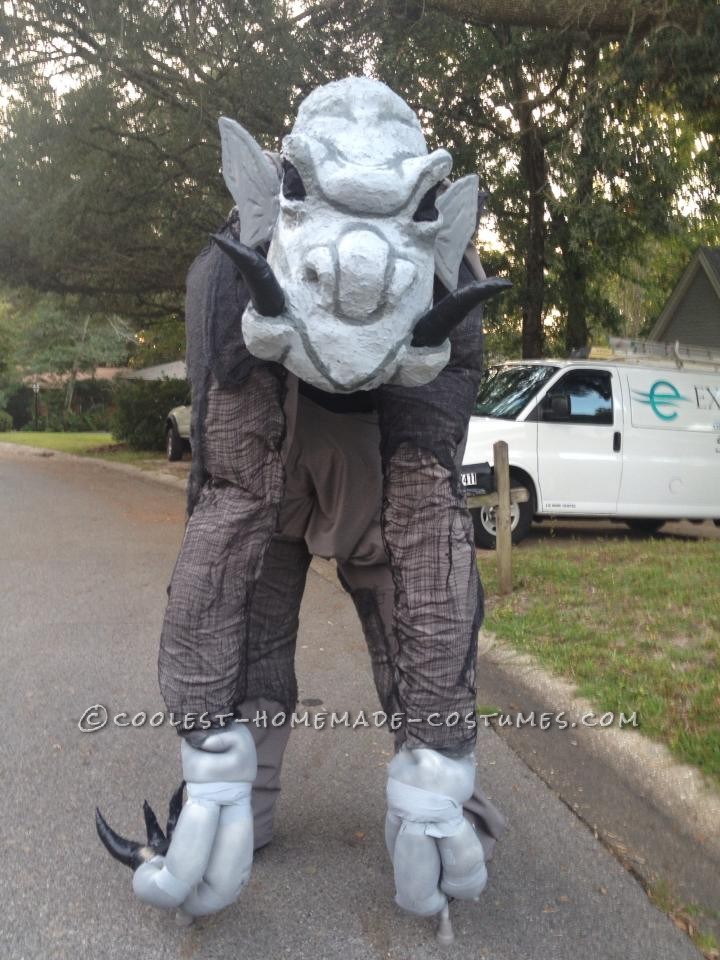 A journey back in time to show,

A young hard headed man just a year ago,

Sitting on the floor anoyingly sighing,

Saying, “What’s the point of even trying!”

His friend was busy with a mask,

To wear about at the Halloween bash,

I groaned and asked, “What’s the point?”

He scowled a face of disappoint….

Lame, i thought and I was done.

I left and went about my night….

Halloween is for kids right?

A whole year later and there I was. Once a boy who did not understand all the buzz. But there she was asking and begging. Seeing if we could come up with some sort of costume, egging and egging. I said oh well, it’s much too late. If we make a costume now we will probably hate it. But then my eyes got stuck gazing upon, an idea so great visions begun to spawn. I watched a video or two, and soon I had my Big TO DO! A stilted costume I would create, with arms and legs a big head…OH HOW IT WILL BE SO GREAT! I scraped my brain for all the ideas and went to the store to gather the goodies.

Back and forth I drove my car to store after store far and far. I spent and spent and had not enough. But things came together quickly, though tough.,I tinkered and stammed and fought as I went. But found the foam glues together best with contact cement.

I wrapped up the stilts and both of the crutches, wrap them in foam and glued on the edges. Then cover in fabric preferably one that’s on sale, because I spent so much my wallet grew pale. After the fabric I stuck on some creepy drapes, got’em at Dollar tree, good for all kinds of shapes.

Then came the time to make a big head, a helmet I started with and glued on the cardboard. Making a skeleton of what I wanted and covered in foam-fill spray insulation let dry and carved with a sword. Piece by piece I shaved it all down, all the little shavings covered the ground. Then some LIGHTWEIGHT Spackle to make it all smooth.

Let dry and spray paint any color you choose. Then for the back piece, start with a shirt, secure foam to  it, be careful with hot glue, it hurts. I found what worked better was those little brass pins for letters, they puncture right through and secure things together.

I tried it all on and realized a flaw, the head was so heavy it made my neck feel like straw. Back to the store to come up with a solution, suspenders were on sale! no more confusion! They attached to the helmet and down to my butt, they held up the helmet and were comfortable, somewhat. I put in the flash lights to liven up the eyes, made it real eerie under dark skies.

Finally my moment to showcase my creature, I arrived at Harborwalk Village and stood by the bleachers. If I held still the thought I was a blow up decoration, but then when I moved they scattered in all directions. I took to the stage and the audience cheered. I won first place! my hard work had cleared.

Thank you very much for your consideration. I hope you enjoyed the story I told. This was a fun experience for me and my girlfriend. We did only make this costume in 2 weeks before the contest. I work full time as an HVAC technician and worked all night on it after I got home. I found dry wall stilts on Craigslist and had to extend the crutches. The biggest problem is definitely vision because all you can see is the ground below. I would have tied a rope or a string to my neck and had my girlfriend movie it in the direction she wished for me to walk.

I got so many good comments and wows. The MC of the contest was talking to my crotch thinking it was my face! hahahaha. One lady asked if there was two people. Some even thought I was a robot. I wish I had enough time to add on big wings. Maybe next year… But overall I invested a ton of money and time into this build and never would have thought I would ever build a costume. I give all the credit to Jim Henson’s imagination when he created the land striders and the rest of the credit to the stilt spirit videos I saw that showed me the basics of how to make this costume and what materials to use. I wanted to make something creepy and larger than life and it payed off with the fear some people showed. 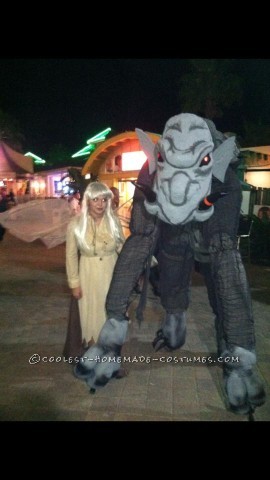 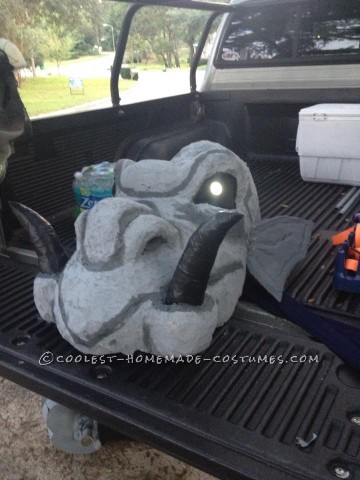 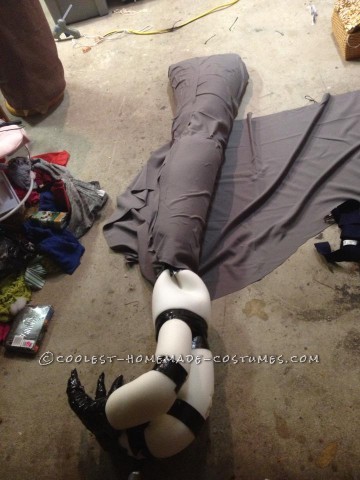 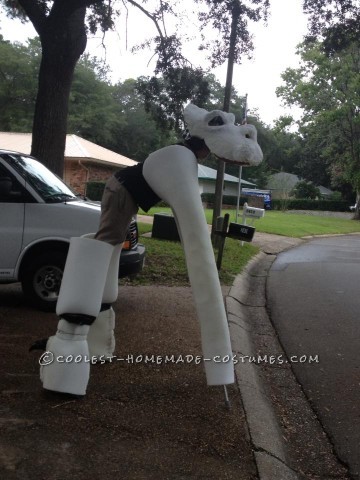 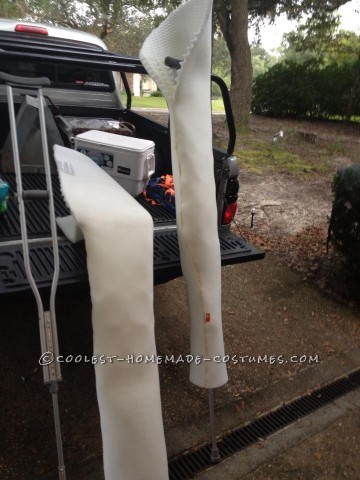 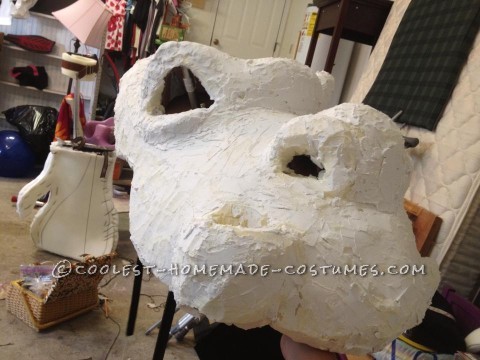 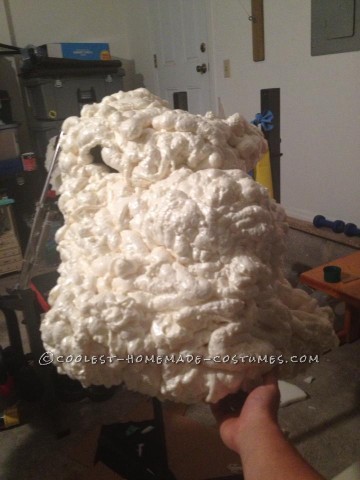 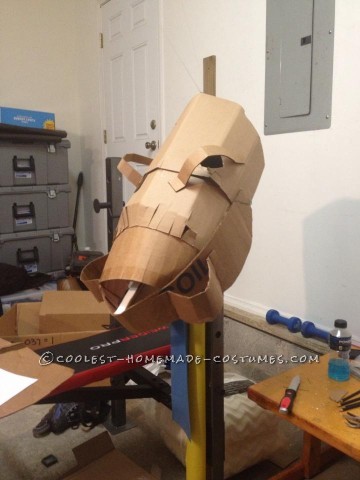 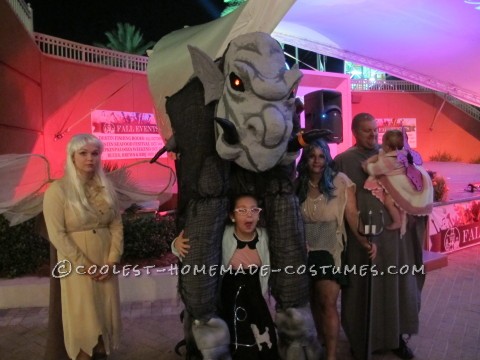 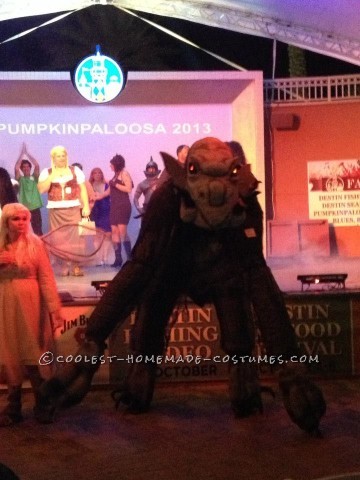