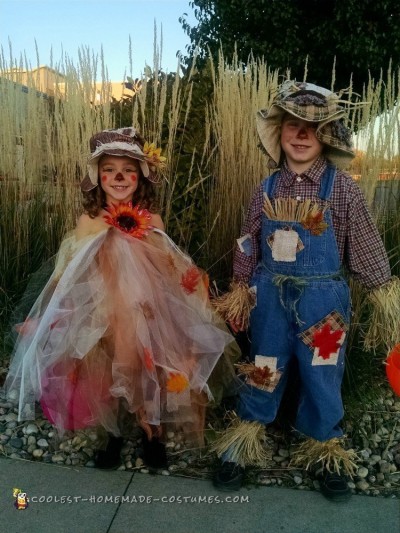 These his and her homemade scarecrow costumes were created for my daughter and son. I wanted unique costumes that were original and I came up with scarecrows. My children agreed with the idea and I explained it to their sitter. Their sitter then made the idea come to life with all sorts of hidden features.

How to Make These Homemade Scarecrow Costumes

It took about a week all together to make the costumes and the cost of each was about $30. The hats were the most difficult with the sewing required and the challenge of getting them to look cute, but also rustic so they had the feel of a scarecrow.

Everywhere we went, my children were getting compliments and I was being asked where I got the costumes. I had to tell them that you can’t buy them since they were made from the love that our sitter has for my children. She deserves all of the credit since my children were thrilled to wear their costumes.