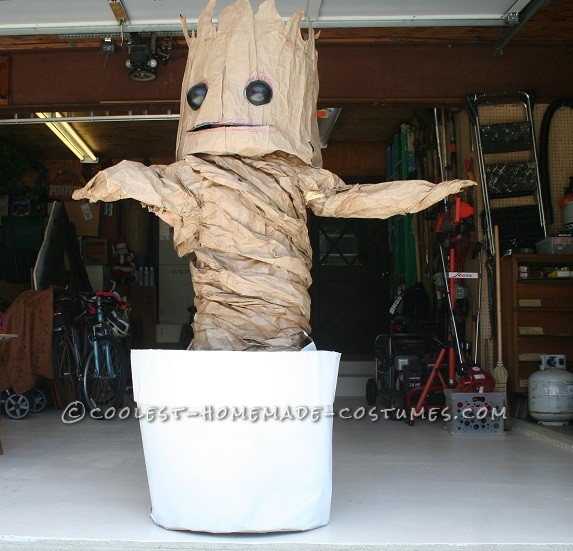 Baby Groot is getting down to an Awesome Mix of tunes. For awhile, I have wanted to try making a paper costume. I bought a large roll of brown paper from the home improvement store and a large bottle of white glue.  I wanted to make a simplified version of Groot that the average crafter could afford to make. This costume requires no special skills.

The headpiece is started out as a large tube of paper. I made it about 3 layers thick for stability. Then I drew on the jagged hairlike branches at the top and cut out the top with scissors. I made holes for the eyes. The eyes are a foam rubber ball cut in half and painted black. I glued these to the inside. The bottom of the head is rounded in by curling the paper inward. This didn’t need any extra glue. Once curled it stayed inplace.

The body was created over a manequin to keep its shape . I covered the manequin in a large tube of the paper         ( with 2 arm holes). Then starting at the shoulder  I just wrapped large twisted lengths of the paper around the body. It took about 7 of these twists to cover the body. The twists were pinned in place. After the body was covered I painted all the joining areas with a glue water mix. After the glue dried I cut a slit down the back from the neck area to the low back . The paper is pliable and the opening is wide enough to step into and then safety pin closed.

The arms were long twists of the paper that I glued to arm openings I left at the top sides of the body.

The pot was formed by using  the paper and wrapping it around two circles of cardboard or hula hoops. My pot is spray painted white. THere is no bottom to the pot .To walk around I could grab and hold the pot with the paper limb arms.

The costume is sturdy enough for several hours , but it would not be something that would take a lot of wear. If you wanted a more permanent style of costume I would advised hardier materials. This is great for a one time wear such as Halloween. 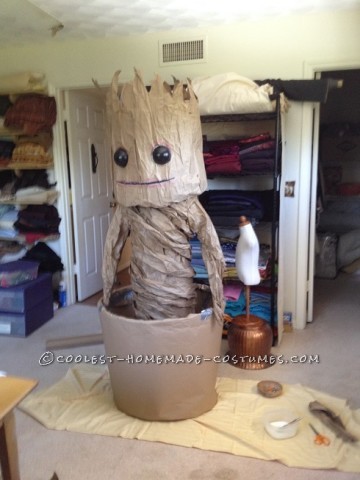 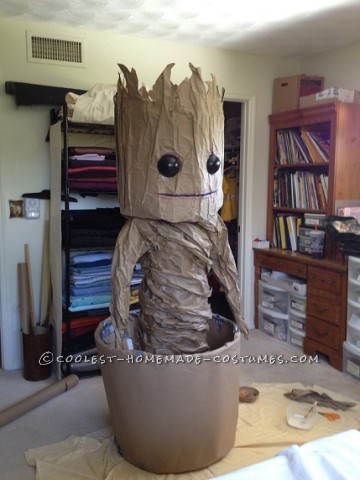 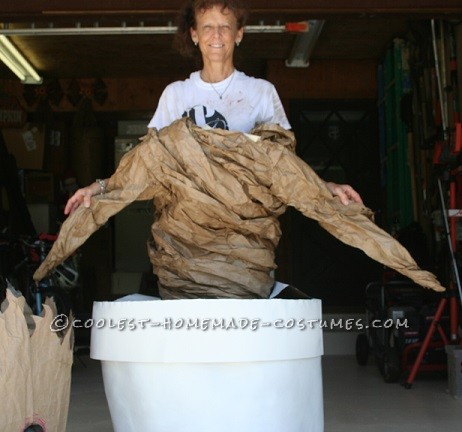