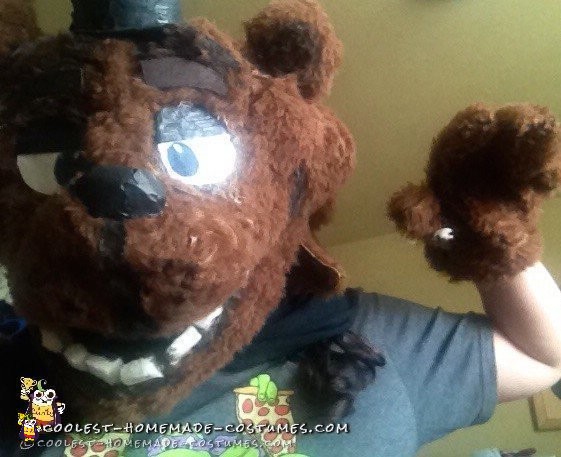 Hello and welcome to my Freddy Fazbear costume from Five Nights At Freddy’s. I decided to make Freddy Fazbear because I love the game and I saw other people making FNAF costumes.

I made the head out of some foam. I first put a black t-shirt into a ninja hood onto the foam mannequin head. I grabbed some foam and began to shape it. The fur I got is brown fur from Hobby Lobby. The eyeballs are made out of paper and vinyl, while the eyes are made from buckrum and were colored blue since Freddy’s eyes are blue.

The handpaws are both sewn. The nose for my Freddy Fazbear costume is made out of foam covered in black paper.

I wanted to do the full body but saw that I didn’t have that much foam and fur left, lol. So that’s why I made a partial. I also made a tail. It’s just a bear tail stuffed with polyfil stuffing. It was kinda difficult to shape the mask, but it was all worth it.

My mom and Step-dad were surprised and thought that my Freddy Fazbear costume was cool.

Thanks for reading. FNAF FTW and keep on costuming! :D